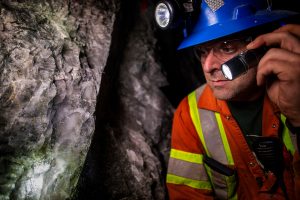 In the third quarter, gold producer Alamos Gold generated record cash flow of US$76 million, led by strong operating performance across its three operations in Ontario and Mexico. During the reporting period, Alamos generated 117,100 gold oz., and sold 116,035 oz. at an average realized price of US$1,882 per oz., at all-in sustaining costs of US$949 per oz. sold.

The resulting record cash flow led the company towards a 33% increase in its quarterly dividend, which increased to an annual rate of US$0.08 per share, starting with December’s payout.

“We had an excellent third quarter financially and operationally with strong performances at all three operations driving costs significantly lower. This included another record quarter at Island Gold, and Young-Davidson starting to demonstrate its full potential following the completion of the lower mine expansion,” John McCluskey, Alamos Gold’s president and CEO, said in a release.

While Island Gold delivered record performance, producing 39,600 oz. of gold due to higher grades mined, Young-Davidson met a milestone in July, with the completion of the lower mine expansion. The tie-in of the Northgate shaft allowed Alamos to achieve average mining rates of 6,700 t/d in the quarter, and produce 36,400 oz. – rates are expected to increase to 7,500 t/d by year-end, driving unit costs lower.

The Mulatos open pit in Mexico churned out 41,100 gold oz. in the quarter, for a total record cash flow from operations of US$130.8 million and record adjusted net earnings of US$56.9 million.

Alamos closed out the quarter with US$274.1 million in cash and equivalents, and US$40-million worth of equity securities. After quarter-end, the company repaid US$100 million of its revolving credit facility, and is now debt-free.

With this strong financial position, the gold producer has its sights on high-return growth.

This summer, Alamos announced that it would be going ahead with an expansion of the Island Gold mine, to 2,000 t/d, and up from 1,200 t/d currently, through a new shaft build. The expansion study results, released in July, suggest average annual gold production of 236,000 oz. annually starting in 2025, once the shaft is complete, at mine site all-in sustaining costs of US$534 per oz. The capital cost estimate for the expansion stands at US$514 million. Based on a base-case gold price of US$1,450 per oz., the after-tax net present value estimate for this expansion comes in at US$1.02 billion, at a 5% discount rate, with a 17% internal rate of return.

Also in July, the company released internal study results, and announced that it would be going ahead with construction, of the permitted La Yaqui Grande heap leach project in Mexico, 7 km from the Mulatos operation.

This project would deliver an average of 123,000 gold oz. annually, starting in the third quarter of 2022, at mine site all-in sustaining costs of US$578 per oz. With a five-year mine life and an initial capital estimate of US$137 million, the after-tax net present value estimate for this build stands at US$165 million, at a 5% discount rate and based on a US$1,450 per oz. gold price, with a 41% internal rate of return.

“We expect to continue to generate strong free cash flow while reinvesting in high-return projects like La Yaqui Grande and the Phase III Expansion at Island Gold, which will support further growth and returns to shareholders,” McCluskey added.