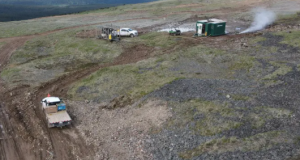 The most recent drill results from the AGB zone within Benchmark Metals’ Lawyers project in British Columbia hit broad and high-grade intervals of near-surface gold-silver mineralization. This drilling has expanded the AGB zone to the west, to over 600 metres of strike, and from surface to a vertical depth of over 270 metres.

The high-grade results appear to be from the western part of AGB, where drilling south of historic underground workings hit high-grade zones, with grades increasing with depth.

In the release, John Williamson, the company’s CEO, noted that the AGB zone remains open and that drilling within this area continues to hit additional mineralization to the west, south, and at depth.

“When 2020 drilling is completed at AGB, we anticipate significant gold-silver ounces from surface to depth that will contribute to the 2021 mineral resource estimate.”

Benchmark is working to deliver an updated resource estimate for the property in the first quarter of next year; and a preliminary economic assessment of the project in the second quarter.

Thus far this year, the explorer has drilled 11,863 metres at AGB; and over 66,000 metres throughout the Lawyers property, with plans to complete 100,000 metres this year.