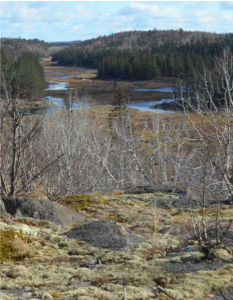 The most recent drill results from Canadian Palladium’s 9.9-sq.-km East Bull property, 90 km west of Sudbury, Ont., returned broad intercepts of near-surface palladium mineralization, from an area downdip of the current resource. According to the press release, these preliminary results (which exclude rhodium values) are the widest intervals of palladium mineralization reported to date at East Bull.

The latest results are from within 135 vertical metres of surface and from the central part of the East Bull property.

In the release, Gary Clark, a director of the company, noted how these most recent assays could potentially expand the current resource at East Bull.

“The results present a favourable outcome for expanding a pit-constrained mineral resource estimate along strike and to depth.”

The drillholes reported hit zones of palladium mineralization, associated with disseminated sulphides, over 250 metres of strike. This mineralized zone dips north at a 45-degree angle and has been traced over approximately 200 metres downdip and remains open at depth and along strike.

A 10,000-metre drill program is ongoing at East Bull, aimed at expanding the inferred resource – assays for a further 14 holes are pending. These drillholes were completed to the east of the latest results.

East Bull covers over 3.6 km of a palladium-mineralized zone, which is part of the East Bull layered gabbroic intrusion. To date, this unit has been drilled over 1.8 km of strike. Canadian Palladium acquired East Bull in 2019.