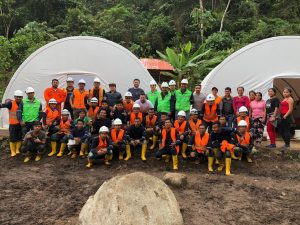 According to the company, this most recent intercept expands the known mineralization at depth and suggests higher metal grades in the Warintza Central zone, where historic drilling has been completed down to an average depth of less than 200 metres.

“We are very pleased to have intersected a long interval of consistent, high-grade porphyry mineralization from surface on the first-ever deep hole drilled on this property,” Jorge Fierro, the company’s VP of exploration, said in a release. “The hole was collared within the footprint of Warintza Central, but greatly extends mineralization to depth before terminating in a barren dyke.”

Geological interpretation suggests that this most recent interval is from the outer halo of a porphyry system. Solaris is also starting an airborne geophysical survey to zone in on mineralization both at Warintza Central and within the 5-km long Warintza porphyry trend.

The Warintza Central area features an existing pit-optimized inferred mineral resource of 124 million tonnes grading 0.56% copper, 0.03% molybdenum and 0.1 g/t gold (0.7% copper-equivalent), which is based on less than 7,000 metres of historic drilling. This resource is based on a 0.2% copper cut-off and remains open for expansion.

No drilling has been completed outside of the Warintza Central area – a 40,000-metre diamond drill program is underway at the site with additional results expected by early September.

Solaris is part of the Canada-based Augusta Group, which is focused on the mining sector and co-founded Equinox Gold.