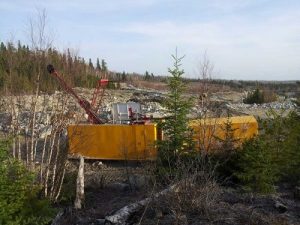 GFG Resources has begun this year’s second-phase, 8,500-metre drill program at the 475-sq.-km Pen project, 40 km west of the Timmins gold district in Ontario. The drilling will test high-grade gold targets across four prospective areas of the property. Pen covers a 50-km-long section of Archean greenstone, the interpreted western extension of the Porcupine-Destor fault zone.

The drilling within the Reeves area will follow up on April’s high-grade gold discovery at the Nib prospect, which returned 8.5 metres of 71.27 g/t gold, starting at 50 metres, by testing its strike and depth extensions.

At Jehann East, three to four priority targets will be tested within the 3-km-long Boundary trend. Within the Deerfoot region, several holes are scheduled to test for extensions of the HGM, Crawford and Sewell North zones.

“We have made significant progress with our summer field program and now are in a position to aggressively drill test several targets with our largest ever drill campaign to date,” Brian Skanderberg, the company’s president and CEO, said in a release. “With a strong cash balance, robust and successful exploration model and several highly prospective targets, including the Nib discovery in hand, we are well-positioned for an exciting second half of the year.”

In July, GFG announced high-grade rock samples from the western end of the Boundary trend. In June, the company released additional drill results from Pen, reporting intercepts that included 1.2 metres of 1.31 g/t gold from the HGM prospect and 1 metre of 2.36 g/t gold from the Slate Rock region.