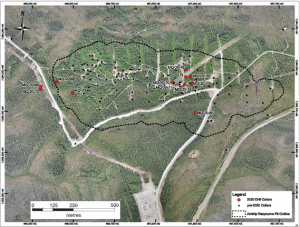 YUKON – Banyan Gold has released assays for nine holes completed at the Airstrip zone within its AurMac property, 56 km northeast of Mayo. This drilling has extended the strike length of the mineralized zone by approximately 300 metres to the west, as well as down-dip, within the limits of the conceptual pit that constrains the existing Airstrip deposit.

According to the company, these latest results also show continuity of the gold grades within the Airstrip deposit, both on strike and down-dip.

“These results not only demonstrate the continuity of the AurMac gold deposit, but the long intervals will add meaningfully to the resource,” Tara Christie, the company’s president and CEO, said in a release.

Christie added that Banyan’s exploration is guided by its geological and resource models for the property; drilling is expected to continue through to late fall.

Today’s release features the first results from this year’s exploration program at AurMac, with 25 holes, totalling over 5,000 metres, completed on Airstrip thus far in 2020. This includes 1,400 metres in seven holes drilled at the Powerline zone, within 1 km of Airstrip.

Assays are pending – Banyan noted that laboratory turn-around times are higher than expected; both due to COVID-19 precautions and as a result of a high volume of samples submitted. Turnaround times of approximately two months are expected to continue.

In May, Banyan published an initial resource estimate for the near-surface Airstrip and Powerline deposits at AurMac, with a total of 52.6 million pit-constrained inferred tonnes at 0.54 g/t gold for a total of 903,945 oz. Airstrip contributes 46 million tonnes at 0.52 g/t gold to this inventory. The resources are based on a 0.2 g/t gold cut-off.

At 92 sq. km, AurMac is adjacent to both Victoria Gold’s Eagle gold mine and Alexco’s Keno Hill silver district. Based on option agreements with both companies, Banyan may earn up to a 100% interest in AurMac.