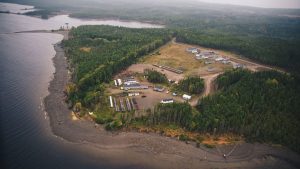 NEWFOUNDLAND – The latest drill results from the Berry zone, within the 6-km long Sprite corridor at Marathon Gold’s Valentine gold project, have extended the strike length of the zone to 650 metres, up from 450 metres.

“Our 2020 exploration program is focused on new discovery, with broad stepout holes into previously untested areas,” Matt Manson, the company’s president and CEO, said in a release.

Manson explained that one rig is currently stepping out to the northeast from the Berry zone with a second drill, expected to start in September, scheduled for exploration to the southwest, from the margin of the Marathon deposit; within the 6-km long Sprite corridor.

“At the end of this campaign, we will have drilling information along the full 6 km of the Sprite corridor between Leprechaun and Marathon,” Manson added. “This is high-risk, greenfield exploration, with no certainty of success. However, the results achieved to date at the Berry zone give confidence in the potential for additional discoveries along this highly prospective trend.”

Eight of the nine holes reported in the release returned intersections greater than 0.7 g/t gold, with all of the intercepts returning intersections in excess of the 0.3 g/t gold cut-off used in the company’s latest resource estimate for the project, which was published in January.

In April, the company released a prefeasibility study for Valentine, which outlined a 12-year open pit and conventional milling operation producing an average of 175,000 oz. of gold annually in the first nine years of operation. With an initial capital cost of $272 million and average life-of-mine, all-in sustaining costs of US$739 per oz., the net present value of the project, at a 5% discount rate, is estimated at $472 million, based on a US$1,350 per oz. gold price, with a 36% internal rate of return.

A feasibility study for the project is expected next year.