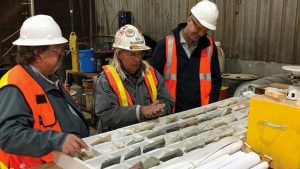 Integra Resources has released assay results for five holes drilled as part of this year’s exploration program at the Florida Mountain deposit within the DeLamar project in southwest Idaho, reporting several long mineralized intercepts. According to the release, these latest results “continue to underscore the potential that exists in near-deposit targets at Florida Mountain.”

The five drill holes include results from both within and below the current resource boundaries.

The company’s exploration team has recently modelled seven past-producing high-grade vein structures, which are plunging shoots that extend over 300 vertical metres below the top of Florida Mountain. These structures are approximately 100 metres to 200 metres long and 1 metre to 8 metres wide.

This updated model provided the data that helped design the latest drill program – the 87.5-metre intercept hit several of the high-grade shoots within a target area modelled as the northern extension of one of the veins.

“Today’s drill results continue to demonstrate the potential for a significant high-grade resource at Florida Mountain,” George Salamis, Integra’s president and CEO, said in a release. Salamis added that the company has also defined a geophysical anomaly to the west of the Florida Mountain resource: the first part of an induced polarization geophysics program planned for Florida Mountain has traced a 1,200-metre long anomaly, in an area known as Rich Gulch.

Integra is also completing metallurgical drilling to determine the optimal processing pathways for the DeLamar and Florida Mountain deposits; the company plans to advance these to the pre-feasibility level next year.

Two drills are working at Florida Mountain, with a third rig active at the War Mountain target.

A September 2019 preliminary economic assessment (PEA) for DeLamar outlined a 27,000 t/d heap leach operation with a 2,000 t/d mill for the unoxidized Florida Mountain material, producing an average of 124,000 oz. of gold-equivalent a year over a 10-year mine life at all-in sustaining costs of US$619 per oz.