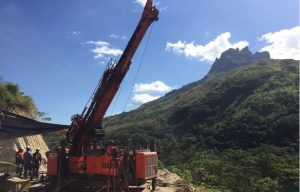 Drilling at the Navilawa Caldera Credit: Lion One Metals

The proposed five-year mine would generate an average of 77,969 gold oz. annually, at all-in sustaining costs of US$713 per oz. With an initial capital cost estimate of US$66.8 million and based on US$1,400 per oz. gold, the after-tax net present value for the proposed build stands at US$121.7 million, at a 5% discount rate, with a 50.9% internal rate of return and a 1.7-year payback.

“The PEA for Tuvatu demonstrates robust economic potential for a low-cost, high-grade gold operation with low upfront capital costs, enabling rapid payback of capital,” Walter Berukoff, Lion One’s chairman and CEO, said in a release. “We are encouraged about Tuvatu’s potential for a near-term development and production opportunity, with further exploration and expansion potential as we continue our current drill programs to extend the known mineralization of Tuvatu and the surrounding Navilawa Caldera.”

When compared with the prior PEA from 2015, this latest study incorporates a resource updated in 2018, in addition to a stronger production profile with a slightly shorter mine life.

The release also notes additional upside to the latest early-stage study from last year’s expansion of the project area.

With permits now in place, Lion One is evaluating potential pilot plant configurations and the company has completed the majority of the earthworks required for a starter operation.

This year’s exploration program at the project, in Fiji, is targeting feeder pathways to the gold system.

As part of its tenements, Lion One holds the entirety of the Navilawa Caldera, which is a 7-km diameter alkaline gold system.