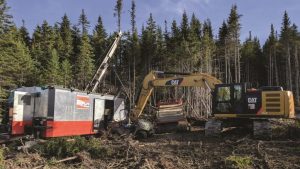 Marathon Gold has released assays for 13 drill holes completed within the 6-km-long Sprite corridor at the company’s Valentine gold project in central Newfoundland.

Based on the release, the gold mineralization within the Sprite corridor appears to be best developed within the previously defined, 650-metre long stretch, known as the Berry zone. The notable intercepts above were also drilled along this strike.

Matt Manson, the company’s president and CEO, indicated that the most recent results include both infill and stepout holes to the northeast. An infill program is now underway at the Berry zone as Marathon looks to define a resource within this prospective zone.

Manson added that there are currently four rigs working at the project – two are working on stepout holes from the Berry zone, one is completing an 8,000-metre infill program at Berry and a fourth unit is now scout drilling the Narrows prospect, northeast of the Marathon deposit (and outside of the Sprite corridor).

“The 2020 exploration program at Valentine is discovery-oriented and focused on areas with little previous drilling. The success achieved to date at Berry has allowed us to add an infill program aimed at delineating potential mineral resources,” he said in a release.

Manson also indicated that additional infill and greenfield exploration results are expected throughout the fall.