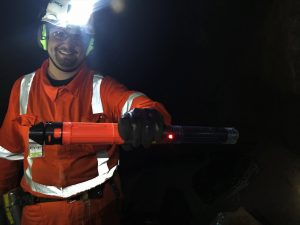 By using Orica’s fully wireless initiation system, WebGen, Nexa Resources significantly reduced ore dilution to 20%, from 27%, at its Nexa Vazante zinc and lead mine in Brazil, resulting in a net benefit of US$1.6 million, according to a release from Orica.

The single-blast event achieved a smaller hydraulic radius by keeping the pillar during stope extraction, which resulted in a reduced cycle time of 20 days, down from an expected 90 days, by maintaining two mucking access points to the main stope, which was possible due to the wireless capability of the WebGen system.

This unique blasting approach improved safety by pre-loading the pillar with WebGen initiators, minimizing the exposure of personnel by eliminating the need to re-enter the area.

“Thanks to this technology and partnership, we recovered an island rib pillar, which is a pillar kept in the open stope for dilution control. After all the ore from the block was extracted and the pillar had completed its requirement, the pre-loaded holes were successfully initiated remotely,” Mateus Ribeiro, Nexa’s chief mining engineer, said in a release. “We went through a series of improvements in the evolution of blasting technology with Orica, from the first detonators until nowadays using 100% wireless detonators. The blast happened two levels below us, so we are 400 metres away, above the shot. All encoded signals were sent through the rock with the safety protocols to fire the blast being followed.”

In 2019, Orica proposed implementing the WebGen wireless initiating technology at Vazante to support the operational and safety challenges of the mine. By deploying WebGen’s wireless technology, ore in pillars can be recovered through pre-loading, without the need to return to the open stope. With the WebGen system, the mine was able to sequence the blast and extract previously inaccessible ore, while improving productivity.

The pre-loaded pillar was safely fired after 33 days, with several ore blasts taking place alongside the pre-loaded pillar. A second application is currently being studied to allow pre-loading of an entire stope, to reduce operational risk and cycles while increasing production at the site.