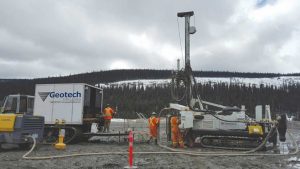 Osisko Gold Royalties has announced the spin-out, through a reverse-takeover transaction (RTO), of Osisko Development. The newly formed developer will hold the past-producing Cariboo gold project in B.C. and the San Antonio gold asset in Mexico’s Sonora state, in addition to other mineral assets and a portfolio of equity positions in publicly listed companies.

To execute this transaction, Osisko Royalties has entered into a binding agreement, outlining the terms of the transfer of assets to Barolo Ventures, in exchange for shares of the corporation, in a reverse takeover.

As part of the deal, Osisko and Barolo have also engaged a syndicate of underwriters, with the underwriters agreeing to sell, on a bought-deal private placement basis, 13.35 million subscription receipts of the spin-out, at $7.5 per receipt, for gross proceeds of $100 million. The bankers also have the option, exercisable up to 48 hours prior to closing (the financing is expected to close around Oct. 29) to purchase up to 3.3 million additional receipts, for up to a further $25 million. Each receipt allows the holder to receive, at no additional cost and upon completion of the RTO, one share of the new issuer (after a 60:1 share consolidation of Barolo) and half of a warrant.

In the release, Sandeep Singh, Osisko Royalties’ president, noted how the transaction is expected to simplify the respective Osisko companies.

“We are very pleased to announce this spin-out transaction, which will simplify Osisko Royalties into a pure-play royalty and streaming company, while maintaining exposure to the company-making assets contributed to Osisko Development.”

Singh also highlighted that the technical team is being transferred to Osisko Development to leverage its mine-building knowledge and that the royalty player will keep royalty and streaming interests in the assets transferred.

“We eagerly await the launch of Osisko Development, to advance a rare set of near-term producing and flagship gold assets. Our vision is to develop the Cariboo gold project into one of the predominant mining camps in Canada,” added Sean Roosen, Osisko Royalties’ chair and CEO.

Upon closing of the RTO, Osisko Royalties would hold 88% of Osisko Development, expected to dilute as the assets are advanced; 11.8% would be held by the holders of subscription receipts, with Barolo shareholers at a 0.2% stake.

Cariboo as the flagship development asset

According to the release, the developer will aim for near-term production of over 100,000 gold oz. annually from the development-stage Bonanza Ledge II project in B.C., by the first quarter of next year, and from the San Antonio site, where a permit amendment is underway.

Production from the flagship Cariboo project would then follow. Permitting is ongoing at the site, for a 4,750 t/d underground operation, with full permits expected in 2022, following a feasibility study release scheduled for the second half of next year. The site includes a functioning mill and mineral resources of 21.4 million measured and indicated tonnes, at 4.6 g/t gold, containing 3.2 million gold oz., with a further 21.6 million inferred tonnes, at 3.9 g/t gold, for an additional 2.7 million oz. of gold.

In addition to the spin-out announcement, Osisko Royalties released drill results from Cariboo, with high-grade intercepts from areas outside of known zones of mineralization.

The company started a 40,000-metre drill program this year, focused on expanding the Lowhee zone and defining the Cow and Valley deposits.

Drill highlights from Cow, where results continue to define high-grade vein corridors, include 6.3 metres of 25.79 g/t gold; and 0.5 metre of 6,530 g/t gold. According to Osisko, this latter intercept is the highest-grade assay from all drilling to date at Cariboo.

Notable intercepts from the Lowhee zone on Barkerville Mountain include 12.8 metres of 20.66 g/t gold; and 18.7 metres of 10.53 g/t gold. This area, interpreted as an offset strike extension of Cow, has been defined over an area of 300 metres by 500 metres and to an average depth of 350 metres, and remains open.

Three rigs are currently working at Cariboo, expected to increase to eight this month.

“Since Osisko first got involved in the Cariboo project, we have been firm believers in its potential scale and importance within the sector. Recent drill results continue to confirm our thesis that Cariboo is not just a mining project, but a mining camp,” Sean Roosen, chair and CEO of Osisko Royalties, said in the release.