Palladium One reports long, near-surface intercepts from LK in Finland 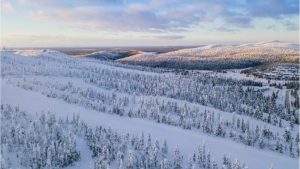 The first phase of drilling at Palladium One’s wholly owned Lantinen Koillismaa (LK) project in north-central Finland has returned long mineralized intervals, starting at shallow depths. The latest results are from the Murtolampi zone, 2.5 km north of the Kaukua deposit at LK.

“We have now shown that both Murtolampi and Kaukua South have the potential to significantly add to the existing NI 43-101 open pit resource at Kaukua,” Derrick Weyrauch, the company’s president and CEO, said in a release.

Weyrauch added that the Murtolampi and Kaukua South zones are both associated with strong geophysical anomalies, which have not been fully tested. Additional drilling is planned for both of the zones this year.

The Murtolampi anomaly has been defined over approximately 1.2 km of strike, whereas Kaukua South has been traced over 5.5 km. The current resource at Kaukua covers an estimated 1 km.

The LK project covers approximately 38 km of prospective basal contact; the Kaukua deposit at the site features a pit-constrained indicated resource of 11 million tonnes grading 1.17 g/t PGEs, 0.09% nickel and 0.15% copper for a total of 635,600 palladium-equivalent oz. Additional inferred resources stand at 10.9 million tonnes at 0.92 g/t PGEs, 0.08% nickel, 0.13% copper, totalling 525,800 oz. of palladium-equivalent. The resources are based on a 0.3 g/t palladium cut-off.