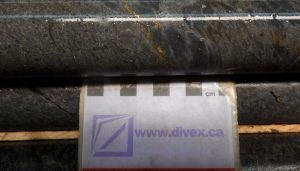 The drillhole returned 21.1 metres of 6.89 g/t gold, which includes higher-grade intercepts such as 2 metres of 4.81 g/t gold, and 11.8 metres of 11.32 g/t gold. The intercept is from a second known mineralized trend at O’Brien, 600 metres to the east of the historic mine at the site.

Hole OB-20-156 is the deepest hole drilled to date within this second trend and indicates at least three high-grade structures below current resources.

While resources within the area of the most recent drillhole extend down to a depth of 400 metres, today’s result, together with intercepts from recent drill programs, suggest mineralization down to almost 700 vertical metres. These results also indicate potential for a connection between this latest mineralization with existing high-grade resources, which could form a high-grade trend extending down to depths of approximately 1,100 metres.

Additional assays are pending for wedge holes, as well as for additional holes completed to explore the down-plunge continuity of the mineralization.

Drilling along the first trend at the O’Brien property, 300 metres east of the old mine, has also returned visible gold, 400 metres below the current resource limits – assays are pending for hole OB-20-174. This intercept hit visible gold at a vertical depth of 960 metres.

“Today’s results highlight why our ongoing drilling program is in its most exciting phase, as we continue to systematically step out to expand mineralization at O’Brien along strike and at depth. Assays from OB-20-156 represent some of the best results received since the start of the drill program and suggest the potential to expand resources within the second mineralized trend,” Mario Bouchard, the company’s CEO, said in a release. “While the majority of our work program has been focused within 1 km along strike to the east of the historic O’Brien mine, we believe there is significantly more upside to be unlocked from a prospective land package that includes more than 5 km of strike length along the prolific Cadillac break.”

To date, Radisson has defined three parallel mineralized trends at O’Brien. These lie 300, 600, and 900 metres east of the past-producing mine. Mineralization within these has been traced down to depths of 950 metres. Almost all of the drilling completed at the property to date has covered 1 km of strike.

Radisson is drilling 75,000 metres at O’Brien this year.