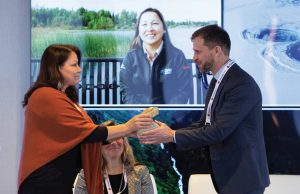 Between 2012 and 2016, Stacey Vincent Cress served as employee development co-ordinator with Toronto-based Detour Gold (now part of Kirkland Lake Gold) to train Indigenous people for jobs at the company’s namesake open pit mine located some 180 km northeast of Cochrane, Ont. The training was conducted under the auspices of Impact and Benefit Agreements between Detour and three nearby First Nations communities, as well as the Metis Nation of Ontario, and by any measure, the initiative was a grand success.

Training programs were available for truck drivers, mining equipment drivers and health and safety officers as well as for jobs in the processing plant. By the time the program was complete, and the mine was in full production, upwards of 180 Indigenous men and women were employed at the Detour mine, representing 28% of the workforce. To put that in perspective, Indigenous employment accounts for 11.2% of the jobs in the province’s 40 mines, according to the Ontario Mining Association.

Historically, such success stories have tended to be the exception rather than the rule. Indeed, for more than a century, mining has been a cornerstone of the economy of northern Ontario – employing thousands of people directly and indirectly and pumping millions of dollars annually into local communities in the form of wages and taxes. But, for the most part, the economic benefits have not enriched the dozens of First Nations communities scattered across the north.

“There’s a lot of mining in northern Ontario,” says Dawn Madabhee Leach, general manager of the Birch Island-based Waubetek Business Development Corp. “A lot of our communities have been on the outside looking in.”

Waubetek is out to change that. The corporation, where Cress is now mining project manager, serves 27 First Nation communities in an area stretching from Sault Ste. Marie to Sudbury to North Bay and along the northern and eastern shores of Georgian Bay. Since 1999, Waubetek has provided financing and economic development services to over 3,000 Aboriginal-owned businesses.

In 2015, the chiefs of those 27 First Nations communities instructed the staff at Waubetek to develop a mining strategy aimed at improving opportunities for individuals as well as Aboriginal-owned companies. Among other things, the corporation is attempting to create an association of Indigenous mining suppliers as well as a mining human resources database for Indigenous employees and job seekers.

Earlier this year, Waubetek reached an agreement with Laurentian University in Sudbury to create a Centre of Excellence for Indigenous Mineral Development – an ambitious project that may eventually benefit First Nations communities across the province, the country and potentially Indigenous groups in other countries.

“It’s all about building Indigenous capacity in the mining sector, but also to build the capacity of mining companies to work with Indigenous People and companies,” says Madabhee Leach.

Jennifer Abols, executive director of Laurentian’s Goodman School of Mines and president and chief executive of MIRARCO (Mining Innovation Rehabilitation and Applied Research Corp.), says that the university, with its mining-focused departments and programs, is a natural home for the new centre. “The biggest gain for everybody is being able to build capacity and create opportunities for people,” says Abols. “We can help connect the right people and help them get the tools they need to build capacity.”

The centre, which will be located on the Laurentian campus and initially will employ an executive director and an assistant, has received funding from Natural Resources Canada and FedNor, the federal government economic development agency for Northern Ontario. Montreal-based Rio Tinto Canada – the first private sector partner – has agreed to contribute $1 million over the next five years.

The contribution is part of Rio Tinto’s commitment to working with First Nations communities. Last November, the company signed a partnership agreement with the Innu of Ekuanishit to create employment and economic development opportunities at the company’s open-pit titanium dioxide mine near the town of Havre-Saint-Pierre on Quebec’s North Shore.

In February, Rio Tinto signed its New Day agreement with B.C.’s Cheslatta Carrier First Nation. The company’s Nechako hydroelectric reservoir and generating station, which supplies electricity to its aluminum smelting operation in Kitimat, is located on the traditional lands of the Cheslatta Carrier. Under the agreement, Rio Tinto will provide job training, employment, and business opportunities at its hydro-electric operation, as well as environmental stewardship.

In addition, the company has worked closely with First Nations of the Northwest Territories to ensure that the Diavik diamond mine benefitted remote, northern communities. Currently, Indigenous People, most of whom are from the North, comprise 27% of the workforce of 1,100. In 2018, Diavik purchased goods and service valued at $158.4 million from Indigenous-owned business and between 2000 and 2018 such purchases totalled $3 billion.

“The catalyst for us investing in the Centre of Excellence and becoming a partner was Dawn’s leadership and vision,” says Todd Malan, Rio Tinto’s Washington, D.C.-based vice-president of corporate relations. “Dawn really wants to make sure First Nations have the tools required to understand what they have in terms of mineral resources and rights.”

That can be more complicated than it sounds even in a region like Northern Ontario with long-established mines producing nickel, copper, gold and zinc. “There are all sorts of newly-attractive minerals and metals like vanadium,” Malan says. “One of the things the centre can do is help First Nations understand what they have in their territories, how valuable it is and what it’s used for.”

Conflict resolution is another high-potential role for the centre, says Waubetek mining project manager Cress. Most First Nations communities don’t have the in-house expertise necessary to assess the complex exploration, development and environmental permits granted to mining companies operating on or near their traditional territories. That can and frequently does lead to opposition to mineral development.

“First Nations communities are often overwhelmed when they receive permits and they’re not sure how to process them,” Cress says. “With the Centre of Excellence they can reach out to an Indigenous-led organization where they can get answers. They can become informed and make informed decisions.”

Waubetek is hoping to have an executive director in place by October, with a public launch planned for PDAC 2021 and services available by April 2021.

Cress says the centre will focus initially on assisting the 27 First Nations within its service area, but will expand its reach once established. “We’d eventually like to have satellite offices or affiliations with universities elsewhere in Canada and even the U.S.” he says. “Internationally there’s so many opportunities. There’s Indigenous People throughout the world that could benefit from the Centre of Excellence.”