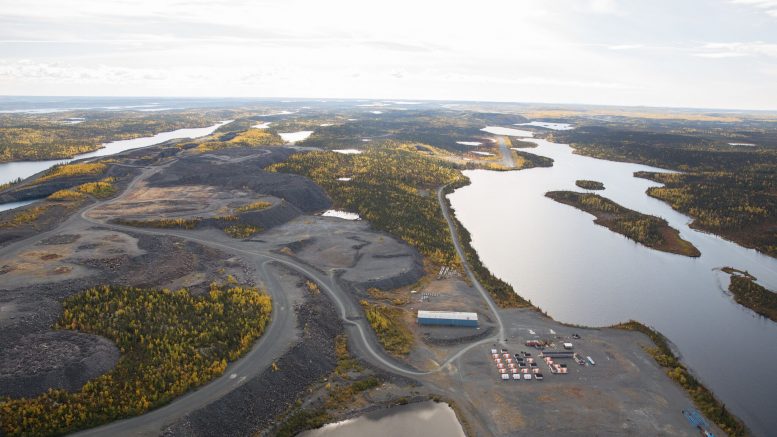 The Colomac gold project at Nighthawk Gold's Indin Lake Credit: Nighthawk[/caption] NORTHWEST TERRITORIES – Construction of the Tlicho All-Season Road (TASR) project, which would provide better winter road access to Nighthawk Gold’s Indin Lake gold project, is proceeding ahead of schedule. In the release, Michael Byron, Nighthawk’s president and CEO indicated that while the company is not currently dependent on road access to the site as it is using an airstrip to transport people and supplies, the TASR would make it easier to reach Indin Lake by road in wintertime. The TASR is planned as an all-season, permanent 97-km long two-lane highway to provide year-round access to the Whati community by connecting to a highway west of Yellowknife. The construction is funded through a public-private partnership, with the federal government funding 25% of the capital costs and the remainder provided by the territorial government. The government of the Northwest Territories is working with the Tlicho First Nation to advance this project. The resulting transportation efficiencies are expected to reduce the cost of living in the region and lead to better social opportunities for residents. The construction of the TASR started in September 2019 and was suspended in April due to COVID-19. Construction resumed in mid-May and, based on an updated schedule, the road is expected to be open to the public by the fall of 2021. To date, 97 km of clearing is complete as well as 36 km of embankment construction. The surface granular base material is expected to be installed this year. Nighthawk’s Indin Lake gold project is approximately 200 km north of Yellowknife and is currently accessible by ice road in the winter and year-round via the airstrip on site. Current inferred resources for the project stand at 50.3 million tonnes grading 1.62 g/t gold for 2.6 million ounces, and are contained within five deposits. Cut-off grades for the deposits range between 0.6 g/t gold and 0.7 g/t gold. Colomac is a past producing open pit with historical production of approximately 500,000 oz. For more information, visit www.Tlicho.ca or www.NighthawkGold.com.