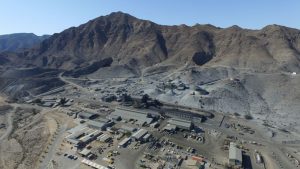 The results of Trevali Mining’s prefeasibility study on an expansion of the Rosh Pinah zinc-lead-silver underground mine in Namibia, to 1.3 million tonnes per year from 700,000 tonnes per year, suggest potential for increased production at lower operating costs starting in 2023.

“Over Rosh Pinah’s 50-year operating life, the mine has processed close to 30 million tonnes and today we have 16 million tonnes in resource, inclusive of reserves, with several advanced exploration targets ready to drill,” Ricus Grimbeek, the company’s president and CEO, said in a release. “To match this exceptional orebody, the RP2.0 PFS recommends an 86% expansion to the existing production capacity by sizing the infrastructure to a nominal throughput of 1.3 million tonnes per annum.”

Grimbeek added that the resulting all-in sustaining cost of US$64¢ per zinc lb. positions Rosh Pinah in the bottom half of the industry’s cost curve.

The study suggests upgrades to the comminution and processing circuits, as well as an additional portal and decline to the WF3 deposit, alongside a new paste fill plant and additional mobile equipment to increase throughputs and lower operating costs.

Grimbeek also suggested that the underground infrastructure and paste plant additions, as well as processing upgrades would “allow us to modernize the mine and produce more metal faster and at a significantly lower operating cost, all while working more safely and reducing our environmental footprint.”

Trevali now plans to complete additional optimization work ahead of a feasibility study, which would start in the first quarter of next year. Optimization opportunities include determining the best underground infrastructure placement, work to improve lead recoveries though additional flotation studies and upgrading inferred resources for scheduling optimization.

Any future construction would start in the first quarter of 2022 ahead of commercial production from the expanded operation by the first half of 2023.

As a result of the prefeasibility, Trevali has updated the reserve and resource statements for  Rosh Pinah – reserves now total 11.2 million tonnes, at 6.26% zinc, 1.33% lead and 19 g/t silver, based on a US$104 per tonne net smelter return cut-off.

The 90%-owned Rosh Pinah mine has been operating since 1969 and produces zinc and lead sulphide concentrates, which also contain copper, silver and gold, shipped to spot markets off of the Namibian coast.