A Grande Alliance puts First Nations in the driver’s seat 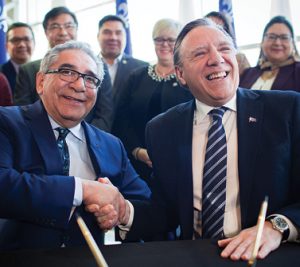 In mid-February, the Grand Council of the Crees and the Quebec government announced the Grande Alliance – a 30-year infrastructure agreement that will see an estimated $4.7 billion invested in railway, road, power and port development in the remote Eeyou Istchee region of Quebec.

The agreement was spearheaded by the Cree Nation of Eeyou Istchee, and attempts to coordinate development in Cree territory – which comprises over one-third of Quebec’s land mass. Under the plan, sensitive areas would be protected from development, with infrastructure built according to both community needs and industry needs.

“This memorandum of understanding marks just the first stage in an ambitious process to transform Eeyou Istchee’s infrastructure and economy,” said Grand Chief of the Grand Council of the Crees Abel Bosum at the ceremony, alongside Quebec Premier François Legault. “The project will help to unlock the wealth of the region’s varied natural resources and create jobs and business opportunities for the Cree and James Bay residents, while protecting the environment and wildlife. It paves the way to a bright future for our young people by giving them the necessary confidence to build their lives and start families in Eeyou Istchee.”

Paul John Murdoch, the Grand Council’s chief negotiator with the government of Quebec, says the timing – in the midst of railway blockades and protests against the development of the Coastal GasLink Pipeline and in support of the Wet’suwet’un First Nation hereditary chiefs in B.C. – was notable.

“It wasn’t lost on us that we signed this agreement in the midst of railway blockades and protests,” he told Canadian Mining Journal in late September. “We believe this is the way to ease those tensions – putting (First Nations) in the front seat.”

Key to this First Nations-led approach to development is balance, as Premier Legault noted at the signing ceremony.

“This memorandum of understanding proves that it is possible to work together on ambitious socioeconomic development projects and take advantage of Northern Quebec’s vast mining potential for the benefit of both our nations, in a spirit of respect for the environment, the territory and Indigenous values,” he said. “This balance is important. It is part of the long-term perspective that the Cree Nation government has envisaged and reflects our desire to jointly build a greener, more prosperous and prouder Quebec.”

Under Quebec’s Plan Nord, launched in 2011 by former Premier Jean Charest, $80 billion was supposed to be invested in infrastructure in the province’s northern reaches over 25 years. That plan has languished and received limited investment. Unlike Plan Nord, the Grande Alliance focuses on a smaller portion of the province and is a First Nations-led “grassroots” infrastructure program, Murdoch says.

While progress has been somewhat stalled by the COVID-19 pandemic, the Grand Council is aiming to award the contract for the feasibility study outlining the first phase of the three-phase Grande Alliance project in early 2021.

Committees that will define exactly what will be included in the feasibility – along the themes of protected areas, communications, energy distribution, transportation and critical minerals – began meeting in August.

But first, reflecting the balanced approach emphasized at the February announcement, the Grand Council is starting with shoring up protected areas in the region. A key concern is protecting sensitive woodland caribou habitat.

While protected areas already exist in the territory, they are patchy and unconnected. The council is negotiating with the province to connect some of those areas so they are more functional and offer better protection for the woodland caribou. Melissa Saganash, director of Cree-Quebec relations with the Grand Council, says that the goal is to have those areas settled in December.

Once that happens, the infrastucture details for Phase 1 can be solidified.

If these projects were all developed as currently envisioned, it would result in 180 30-tonne trucks per day using existing roads that are already heavily used by local communities.

The existing environmental impact assessment process is not necessarily the best way to gauge the cumulative impact of overall development in a region. With the development of a comprehensive and strategic infrastructure plan, the overall effect of all projects can be considered, while directing where future development will take place.

The details of each stage are still being mapped out, but the Grand Council has put together a broadstrokes plan for all three stages of the Grande Alliance.

The first stage of the project, covering years 1 through 5, would see rail infrastructure rebuilt from near Lebel-sur-Quévillon to Chapais. New rail twinning the James Bay corridor from Matagami to kilometre 257 of the James Bay Highway, between the communities of Waskaganish to the west and Nemaska to the east, would also be built. This phase would also include road improvements for the local population and electricification that would benefit both communities and mining companies.

Phase 2, in years 6 through 15, would see the railway extended to kilometre 544 of the James Bay Highway, and a winter road developed from Radisson to the northernmost community of Whapmagoostui on Hudson’s Bay. And Phase 3, starting in year 16, would see the railway extended to Whapmagoostui and the development of a port in the community, which is located on Hudson Bay.

Currently, the province and Cree Nation governments have committed $15 million each towards feasibility studies. The exact composition of funding from provincial, Cree, industry and possibly federal sources will be fleshed out in those studies.

Notably, the MOU with the province includes funding for training programs for members of the 11 communities that are represented by the Grand Council. But well beyond any employment opportunities that may result from it, the project has already energized local communities.

“This has started an exciting discussion where people are putting themselves before the mining companies,” says Murdoch, rather than being an afterthought in development plans.

While Cree communities’ needs are central to the plan – such as reducing costs in the Eeyou Itschee region, where it costs 30% more to build a house than the rest of Quebec, largely because of transport costs – he says the goal of the project is also to reduce risk for mining companies.

“We do not want for mining companies to come to our territory and lose – we want them to succeed,” Murdoch says. “We’re always inviting people to invest in the north, but we have to ask ourselves have we done the minimum to help them succeed?”