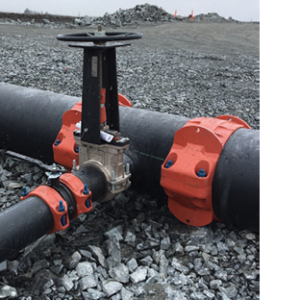 System shutdowns due to equipment wear and failure are expensive for mine operators, constituting millions of dollars in lost production per year. In fact, maintenance commonly makes up more than 30-50% of a mine’s total operating costs.

For mining operations dependent on knife gate valves (KGVs), valve changeouts have been particularly costly because inspection and repair require line isolation and a valve’s complete removal from the piping system. Operational budgets are further strained by the cost of spare parts and storage: in order to reduce downtime during changeovers, mines typically keep a full inventory of replacement valves in stock. So, while KGVs are very common, they also create several pain points for mining operations.

In this article, we proﬁle common KGV maintenance procedures and highlight the process and beneﬁts behind a new “in-line” technology changing the way mines are approaching, and budgeting for, maintenance.

Mines have used flanged wafer or lug-style KGVs for decades to control the flow of extremely abrasive slurry as it is piped through various pieces of equipment to a processing plant. KGVs suffer signiﬁcant wear during operation, so maintenance is performed at regular intervals to reduce the risk of sudden valve failure and unplanned system downtime. This maintenance cycle is dependent on the coarseness of particles running through the system, the percentage of solids contained in the fluid and the velocity of its flow.

When the time comes to repair or replace a KGV, the entire valve must be removed from the piping system in order to be inspected. This process often requires several hours per valve. For larger-scale maintenance projects, replacements inevitably lead to days of system downtime and lost productivity.

But before the inspection process can even begin, the piping system must be shut down and isolated with proper tagout/lockout procedures, as per mandated provincial health and safety regulations. Any electrical or air connections to the valve’s actuator must be disconnected and, depending on the size and weight of the valves, rigging equipment may be necessary to separate them from the system. Cutting pipe or removing couplings may also be required due to flange bolt corrosion caused by slurry leaks or expulsion from the valve’s bottom.

After an old valve is removed, a new valve needs to be installed in its place. To avoid delays during repairs, many mines invest in an onsite inventory of replacement valves, which often means storing one changeout for each valve in their piping system. Considering the hundreds of valves in a single mine’s system, however, the investment in replacement valves and storage can almost equal the inventory costs for heavy equipment used to unearth materials. Especially for producers of gold and other high-value minerals, the opportunity costs of traditional valve maintenance can be very large.

For years, mine operators clamored for a lighter, cheaper alternative to traditional KGVs. In theory, a lightweight and affordable valve would make maintenance easier and less dangerous for workers, without busting operational budgets. However, such marginal improvements on fundamentally outdated valve technology failed to address the most expensive consequences of valve maintenance: constant work stoppages and redirection of resources away from proﬁtable tasks and toward repairs.

Then, in 2017, a new KGV technology was developed speciﬁcally for the mining industry to provide what mine operators truly desired – improved productivity. Featuring a new “in-line” design that allows the valve to remain installed throughout maintenance cycles, users have experienced reductions in maintenance downtime of up to 95%, while generating up to 60% savings in annual valve maintenance costs.

The valve’s wear parts – including a stainless-steel knife, polyurethane seat, packing gland, knife seal, and other hardware – are enclosed into a single-seat cartridge kit, which greatly simpliﬁes repairs. Maintenance crews simply need to isolate the line, remove the wear part cartridge, and replace it with a new cartridge – all while the valve remains installed in-line.

This approach to KGV maintenance delivers beneﬁts on several levels. Not needing to remove the entire valve from the piping system eliminates a substantial amount of downtime. Rather than the several hours typically required for maintenance on a single traditional valve, the new KGV’s wear-part cartridge is removed and replaced with a few easy steps in as little as 12 minutes.

Furthermore, in-line KGVs also decrease maintenance risk to workers. Only one lightweight component – the cartridge – must be replaced, signiﬁcantly reducing the need for rigging with heavy chains and pulleys (which swing over the heads of maintenance crews).

This unique maintenance process eliminates the need to keep a second valve on standby. In fact, investment in spare inventory can be substantially reduced and often virtually eliminated.

Beyond this improved maintenance process, it was recognized that further productivity gains could be secured by extending the valve’s total wear life and, ultimately, the time between maintenance cycles. To this end, the wear cartridge was designed with a polyurethane seat (up to 10 times more resistant than rubber) and knife nearly four times thicker than traditional valves, which result in vastly superior abrasion resistance and operating life compared to traditional designs. 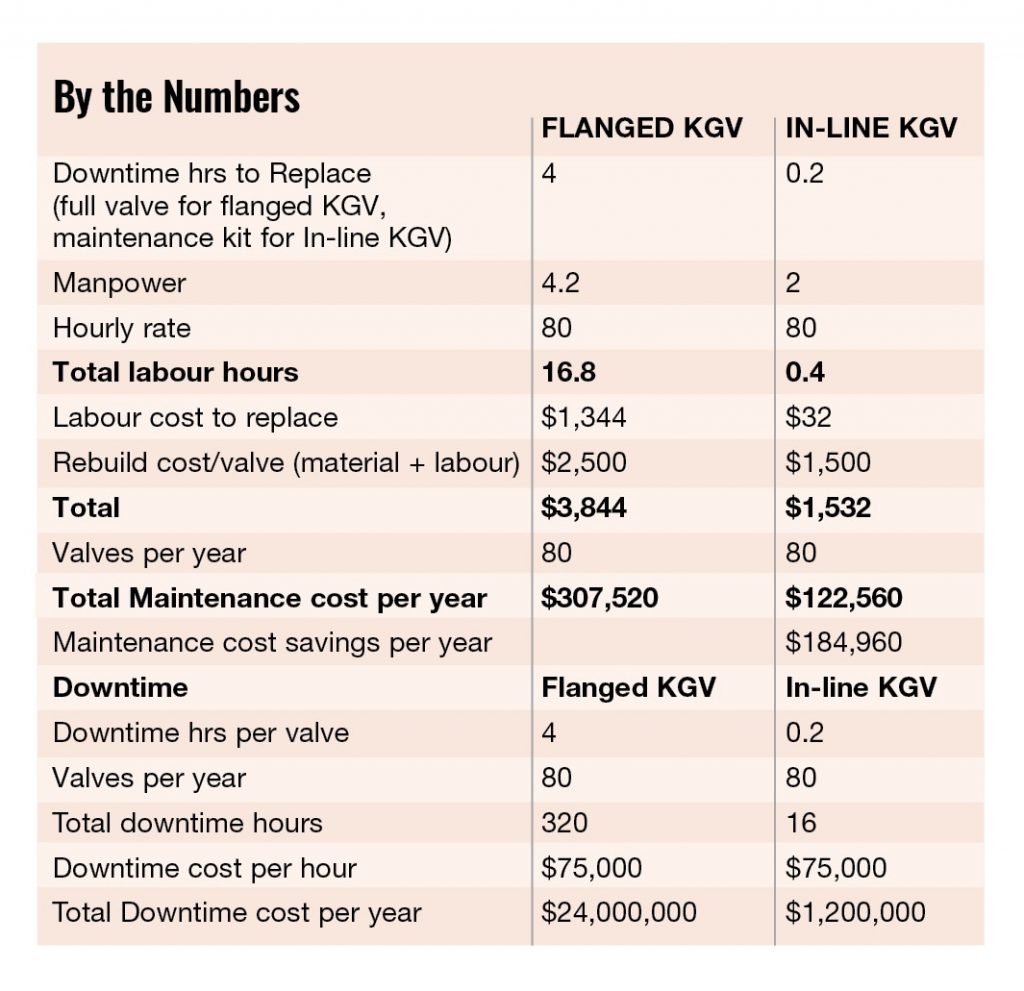 Across all use cases, valve maintenance that once required hours of downtime can be reduced to just minutes through use of in-line valve technology. For mines with piping systems containing hundreds of valves, the yearly safety and cost beneﬁts of in-line KGV technology are likely to be substantial.

Opportunities to use in-line KGVs exist anywhere that piping systems are designed for abrasive services, including slurry, flotation cells, cyclones and tailings.

As slurry systems evolve to handle higher levels of solids content, flow rates and pressures, KGVs are increasingly important components of operating systems. Mining operators who adopt in-line KGVs are able to minimize the rising occurrence and cost of valve wear and maintenance.