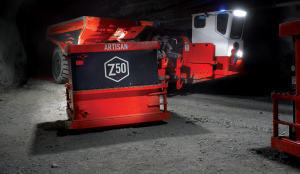 In 2020, battery electric vehicles (BEVs) are nothing new for the mining industry – Kirkland Lake Gold had already recognized enough value in the technology to implement it at its Macassa mine in Ontario in 2012, and Newmont’s Borden Lake recently achieved commercial production with a battery-electric fleet. Attention towards BEV technology has increased exponentially since these first movers in the BEV space emerged. Vale now targets to have 20 BEVs in operation by the end of 2020, Pretium Resources is evaluating the potential for BEVs to improve costs, environmental health, and safety at the Brucejack mine in B.C., and Glencore plans for both Onaping Depth and Nickel Rim Deep in Sudbury, Ont., to be diesel-free underground projects. Engineering firms like JDS Energy & Mining are now including BEV fleet recommendations in feasibility studies – JDS indicated battery-powered load and haul equipment should be used where possible at the PureGold Red Lake mine to reduce ventilation requirements – and countless other projects are making the same recommendation.

There has been a learning curve to arrive at this point where BEVs are so prevalent. The mining industry and OEMs collaborated to develop products that deliver the functionality and productivity that is required by the industry, and collaborated to answer the questions that come along with any new product. Originally BEVs were limited to smaller LHDs, but the industry required machines that could match the power and productivity of their diesel fleets, with higher capacity battery cells and longer drive times. OEMs listened to that need and recently Sandvik-owned Artisan Vehicles released a 50-tonne battery powered truck that matches and even exceeds the productivity of its diesel equivalents. This industry-OEM collaboration along with parallel technology developments in battery compositions and mine digitalization have elevated BEVs to be a viable equipment option for many operations.

As a new product, there was uncertainty around the maintenance costs of battery-powered machines. However, BEVs are no longer just prototypes – there is a growing fleet in production around the world that can be analyzed to provide real insights on maintenance costs. Brian Huff, VP of Technology at Artisan Vehicles says that considering the analyses Artisan has done, “over the life of the machine (total cost of ownership) is about 12% lower.” He adds that “this is only the direct costs, it excludes things like parts holding costs, fuel handling and disposal costs, ventilation reduction, and any tax credits for GHG emissions.” One reason leading to the reduction in direct maintenance costs is that due to the static nature of the electric drive, there are fewer moving parts requiring repair and maintenance in BEVs versus a diesel counterpart.

An indirect cost-benefit of BEVs comes in their energy efficiency – with battery power, a greater percentage of energy purchased is converted to power, whereas the energy potential of diesel is greatly reduced once idling time, transmission losses, and other factors associated with an internal combustion engine are considered. Ultimately, the cost per kWh of power is less for a battery engine than a diesel engine.

Aside from the uncertainty about operating costs of battery-powered machines, mines were initially apprehensive about purchasing batteries as a capital expense because diesel is an operating cost. As a result, OEMs are now considering service and maintenance options like a battery-as-a-service offering, which would allow mines to continue allocating fuel (now batteries instead of diesel) to their operating costs in the form of a monthly battery service and usage charge.

Finally, the safety of batteries in an underground environment is a common concern, specifically with respect to fires. The LiFePO4 (lithium iron phosphate or LFP) chemistry is the safest when it comes to an underground environment where rough walls and roads, acidic water, high temperatures and differing operator techniques can lead to hazards for batteries. While other chemistries offer solutions for less hostile, more predictable environments (such as surface construction equipment), LFP stands out as one of the most forgiving chemistries for use in the often-unpredictable world of underground mining. The LFP chemistry will withstand hazards like overcharge, mechanical shock and vibration, external and internal short-circuits, crushing and penetration without resulting in an uncontrollable fire event. Sandvik uses LFP chemistry in its custom designed and built Artisan batteries and has accumulated over 400,000 hours of operation in tough underground environments without a single thermal event.

As the BEV offering is becoming more aligned with the industry’s requirements, mine operators and engineers are also increasingly understanding that the operational and economic benefits can be realized without significantly modifying existing mine infrastructure. Previously, BEVs were thought to primarily benefit new mines because those projects could optimize ventilation systems from the outset of mine design. However, evidence is increasingly mounting that BEV benefits can be realized in many situations other than just greenfields projects and the economic potential of these options are being explored and proven by engineering and consulting firms.

For example, SRK Consulting conducted a BEV study comparing ventilation requirements for an all-diesel fleet versus battery powered haul trucks and LHDs. The study demonstrated that without modifying the mine’s existing infrastructure, ventilation demand could be reduced by 50% and total fan power reduced by 80% just by adopting BEV trucks and loaders and retaining diesel for the remainder of the mobile fleet.

The benefits of battery conversion will only potentially increase as battery usage is adopted in applications outside of just loading and hauling. Battery power was first only considered practical for smaller LHDs, however there are now battery powered options for LHDs, haul trucks, development drills, production drills, rock support drills, and utility vehicles, essentially meaning the entire underground mining process can now be battery powered. This is a significant development for deep mining projects where ventilation costs can be so extreme as to limit the economic viability of the project.

The industry is undergoing a technology revolution and a number of these new technologies have also supported the BEV revolution. Underground personnel and vehicle tracking devices, like Newtrax’s personnel and equipment monitoring system, enable mines to implement systems like ventilation on demand, putting additional focus on the potential for ventilation savings. And fully autonomous machines will also modify the way mine planners consider ventilation requirements.

Diesel powered loading and hauling is so embedded into the industry’s understanding of the haul cycle that it is a challenge to consider the productivity and efficiencies gained by removing refuelling stops and diesel costs. “We are adding these more frequent but quicker delays for battery swapping but removing the longer delays that we don’t even question anymore because they are built into our understanding of the diesel haul cycle,” says Artisan’s Brian Huff. “What we have found is that with such a short battery swap time, of six minutes, and faster haulage speeds, there is actually an increase in production.”

With an array of battery-powered products available that are suited to the industry’s needs, and mounting data to support the business case for BEVs in mines, the last step in the industry’s adoption of this new technology will be a shift in the way operators think about the fuel and refuelling aspects of the mining cycle, and that shift is already well underway.

Kate Burns is the marketing, intelligence, and strategy manager for Sandvik Canada.