Wheaton has a cobalt stream on Vale’s Voisey’s Bay nickel mine in Labrador. Credit: Vale

Miners rise to the challenges of the pandemic 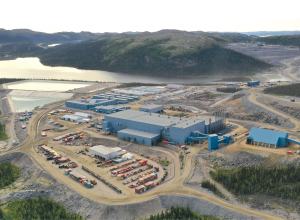 As September starts and schools and more businesses open back up, safety is on everyone’s minds. Six months into the global COVID-19 pandemic, how are mines in Canada doing at managing the risk of the virus to employees and communities?

COVID-19 cases and outbreaks at operations in Canada have been rare – in large part because the country as a whole has done a good job in keeping the case count low. But credit is also due to mining companies, which have generally worked together with employees, governments and communities to draw up new protocols and procedures to operate safely.

Myles Sullivan of the United Steel Workers union, which represents about 25,000 workers at mines across Canada, says working under the new protocols has been an adjustment for all involved, but it’s been a successful transition.

“We’ve had problems and it hasn’t been 100%, but overall, our members have learned a lot and I can say that the employers generally have worked co-operatively with our reps to make sure things are being done safely and properly,” Sullivan says. “There’s been a pretty good job all the way around on this thing from a large majority of the employers.”

On the other side, Sullivan says mine employees have been equally vested in doing their part to keep operations safe.

“Our folks want to go to work, they want to be safe and they want to earn a living, so they take it seriously – they know if there’s an outbreak it can impact the operations and their livelihoods.”

While cases have been rare at mine sites in Canada, one worker at Impala Platinum’s Lac des Îles mine, 85 km northwest of Thunder Bay, Ont., died in April after contracting the virus, and 25 others were infected. The USW represents workers at the mine.

“We were working (with Impala Platinum) before that happened, but it’s a silent enemy that you can’t see and when it’s there, it’s very contagious,” Sullivan says. “Things are back online and have been good so far, so we’re working co-operatively to keep it that way.”

At Dominion Diamond’s Ekati mine in the Northwest Territories, Ivan Landry, president of the Northern Workers Union Local 3050, and a millwright in the maintenance department, says the safety protocols in place – from distancing to screening and an isolation and quarantine wing in case of any infections – have been effective.

The mine was put on care and maintenance in March, with roughly 114 people on site in July; the company is going through a restructuring process and planning a restart, with full operations to resume in the fourth quarter.

“We’re satisfied with what’s been done and we are watching to be sure our workers have a safe place to work and return to,” he says. “The next thing is to get more people back to work safely – so we’re not spreading the virus to communities or to ourselves.”

Workers are currently on a longer rotation of three weeks on, three weeks off, to reduce travel in and out of the site, which can be fatiguing, Landry says.

“It is a bit of a struggle,” he says. “A lot of us have close friends and colleagues that are laid off right now and struggling financially. We feel for them and we’re watching out for each other on site as well, and trying to be as positive as possible. We do have counselling and our supervisors are there for day-to-day concerns and fatigue.”

To avoid introducing COVID-19 into remote Indigenous communities, miners are taking different approaches in different regions of Canada, based on communities’ wishes, which have evolved with the situation.

“Initially the communities were very concerned because it was such an unknown situation, with the news, the lockdown and the borders closing. People were afraid,” said the Tlicho government in the Northwest Territories, in an emailed response to CMJ’s questions.

“But through numerous meetings with leadership, and then many people working with the communities, the fears calmed down. People are still cautious, and making sure that all the protocols are being followed.”

Tlicho employees were called back to work at the Diavik and Gahcho Kué diamond mines in May. While they were paid for the time they had to stay home, the opportunity to go back to work was welcome.

“We would like to continue working, and continue the precautions that are in place. Diavik has integrated mobile testing into their project, and managed a case successfully,” said the Tlicho statement. “It would be good to see all employees really obey what the mine says, with respect to self isolation in advance.”

In Labrador, operations at Vale’s Voisey’s Bay nickel mine were suspended voluntarily for more than three months because of the concerns of Indigenous communites in the region.

“We have a fly-in fly-out operation and some 50% of our workforce is Indigenous, so the last thing we wanted was our Indigenous workers being exposed to the virus and carrying it back to the communties which were ill-equipped to handle it,” says Cory McPhee, Vale’s vice-president of corporate affairs, communications and sustainability.

The company resumed operations in July, and in August was back up to full production, with a full complement of employees, including Indigenous employees.

McPhee says starting back up was a joint decision with the support of both the Innu nation and the Nunatsiavut government representing the Inuit.

That support came with the stringent health, safety and sanitation measures Vale put in place, including prescreening and medical monitoring for employees before travelling to the property and before leaving, physical distancing and masks. The company has also segregated the operations camp from the development camp for the Voisey’s Bay underground project (first ore from underground is on track for the first half of 2021) to reduce unnecessary interaction between employees.

In addition, Vale has contracted a Newfoundland-based third party to establish a testing facility onsite using PCR (nasal swab) tests that will see everyone tested as they enter the camp and as they exit the camp.

Self-isolation rules vary by jurisdiction. However, once the lab is up and running employees will have confirmed PCR test results before they leave the site to go home.

“The other thing is in the spirit of the true partnership and the nature of the relationship, this is all subject to change,” McPhee says. “If, all of a sudden, there’s a second wave or cases start to materialize, then we’ll have to reeaxamine everything that we’re doing.”

Perhaps the most cautious region in Canada has been Nunavut.

Baffinland, which operates the Mary River iron ore operation in the territory, sent Indigenous workers home with full pay in March, but in April reduced that to standby pay. The company does not yet have a return-to-work plan for Nunavummiut employees.

“Prior to our Nunavummiut employees returning to work, a number of risk management considerations will need to be resolved and we will continue to follow the advice and direction from the government of Nunavut, the Chief Medical Officer and the Public Health Agency of Canada. With that said, we are anxiously looking forward to the return of our Nunavummiut employees to Baffinland,” the company said in a statement to CMJ.

Agnico Eagle Mines also sent home the Inuit members of its Nunavut workforce in March with no return date yet planned. (Its Indigenous workers in Quebec, however, are on the job.)

“Although all our employees are tested prior to coming to site, a fourteen days isolation would be required after each work rotation and is hardly compatible with the work schedules in place, logistics requirements and other impacts,” said Martin Plante, Agnico’s VP, Nunavut, in an emailed response to questions.

The company says it is working on a return-to-work plan that includes various scenarios.

Nunavummiut employees received their full salaries for the first month after they were sent home, and since Apr. 18, have received 75% pay.

To mitigate the salary impact, Agnico has started a pilot project in Baker Lake (the Good Deeds Brigade) whereby employees receive 100% of their salary in return for hours worked with non-profit, community-based organizations.