DOING SOME DIGGING Around Cobalt, Ont.

Hooray for the Royal Canadian Mint! It has struck a 2003 Proof Silver Dollar coin commemorating the discovery of si...
By Canadian Mining Journal Staff January 29, 2003 At 4:43 pm 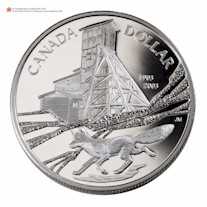 The 2003 Proof Silver Dollar commemorates the discovery of silver at Cobalt , Ont., 100 years ago. This is the Royal Canadian Mint’s first silver dollar struck from 99.99% pure silver.

Hooray for the Royal Canadian Mint! It has struck a 2003 Proof Silver Dollar coin commemorating the discovery of silver at Cobalt 100 years ago. And it is a lovely coin featuring a fox trotting past a historical headframe and a silver vein. A century for Cobalt; a first for the Mint. This is its first silver dollar struck from 99.99% pure silver rather than sterling.

Legend has it that a blacksmith threw his hammer at a fox and uncovered the world's richest silver vein. Nice legend. Fact is J.H. McKinley and Ernest Darragh, two timber scouts for the new railway, made the discovery on Aug. 7, 1903. They found flakes of native silver on the shore of what is now Cobalt Lake. The assayer in Montreal reported an astounding 4,000 oz Ag per ton. They acquired a mining licence and built the McKinley-Darragh mine.

Six weeks after the first discovery, Fred LaRose (the ill-tempered blacksmith) found what was identified as nickel-bearing ore. Later the provincial assayer made a correct analysis silver and the rush was on. LaRose, too, named a mine after himself.

By the end of 1905 there were 16 silver mines shipping a total of 2,144 tons a year. Mine names such as O'Brien, Nipissing, Trethewey, Coniagas, Buffalo, Silver Queen still ring proudly. The camp became a town in jig time, thrown up as fast as people could build. By 1910 Cobalt, Ont., was known around the world for its silver mines. An elegant railway station had been built, and the population topped off at 10,000 people. In 1911, Cobalt's mines produced an whopping 31.5 million oz Ag. By 1963 the mines had turned out 420.5 million oz.

The effects of the Great Depression, which began in 1929, eventually reached Cobalt. It looked to become a ghost town. The easily exploited silver ore was gone. There was, however, a silver lining. Cobalt (the metal) came to the rescue. Mixed with silver in the ore, cobalt had been a nuisance to early miners. Scientific advances, medical technology and the threat of war in the late-1930s provided markets for cobalt. Cobalt (the town) survived until the United States stockpiled the metal and no longer purchased from the tiny town.

In the late 1950s and early 1960s, Cobalt again became a silver mining town. The Deer Horn, Glen Lake, Silver Summit, Timiskaming, Silverfields, and Canadaka were lower grade mines, but they persevered. Now they are closed. Cobalt's rich history is preserved in the Mining Museum and along the self-guided Heritage Silver Trail. We will be helping Cobalt to commemorate its centenary in the April issue of Canadian Mining Journal.