A team of nine women representing the WOMEN IN MINING NETWORK appears to have reached first place in the Weekend to...
By Canadian Mining Journal Staff September 16, 2007 At 5:00 pm 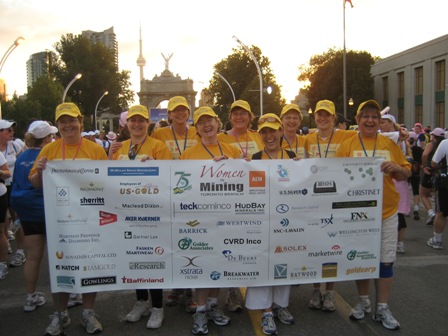 A team of nine women representing the WOMEN IN MINING NETWORK appears to have reached first place in the Weekend to End Breast Cancer event in Toronto on September 8-9. The $17.3-million proceeds of this year's two-day, 60-km walk will be used for breast cancer research and care through the Toronto-based PRINCESS MARGARET HOSPITAL FOUNDATION.

The nine members of the WIM team are MaryAnn Mihychuk, Saley Lawton and Teresa Barrett (all three on the staff of the Prospectors & Developers Association of Canada), communications consultants Nean Allman and Kate Armstrong, Monica Ospina of the Council of Great Lakes Governors, financial advisor Cathy Fletcher of Investors Group in Pickering, and Jane Werniuk with her daughter, grade 12 student Margaret Werniuk.

The WIM team was one of 1,125, but its main rival for top spot was the 84-member Team RBC, which has also collected at least $180,000. The final amounts will only be known on September 17, when the final donations have been processed. You can check out the team standings at http://to07.endcancer.ca/site/PageServer?pagename=to07_homepage.