GOLD: B2Gold powers up solar pant at Otjikoto mine

NAMIBIA – B2Gold Corp. of Vancouver is celebrating the opening of its solar power plant at its Otjikoto gold mine. This plant […]
By Marilyn Scales June 5, 2018 At 4:43 pm 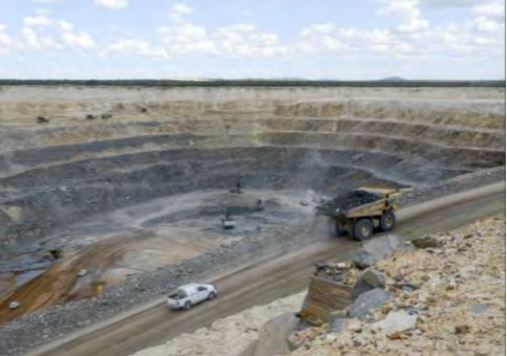 NAMIBIA – B2Gold Corp. of Vancouver is celebrating the opening of its solar power plant at its Otjikoto gold mine. This plant is one of the first fully autonomous hybrid plants in the world. [caption id="attachment_1003723489" align="alignleft" width="300"] The Otjikoto gold mine produced 191,534 oz. of gold in 2017. (Image: B2Gold Corp.)[/caption] Changing the power source to a heavy fuel oil/solar hybrid plant is expected to reduce Otjikoto's fuel consumption by approximately 2.3 million litres and cut associated power generation fuel costs by approximately 10% in 2018. B2Gold said the development of the new facility reflects its commitment to environmental stewardship. The feasibility for a 7-MW solar plant was begun in early 2016. Approval was given in October that year and full commissioning began in April 2018. Cost of the plant is $8.5 million. At the end of 2018, the Otjikoto mine had measured and indicated resources of 35.4 million tonnes grading 1.33 g/t gold for 1.5 million contained oz. of gold. Within the M&I, there were 19.5 million tonnes of probable reserves grading 1.71 g/t and containing 985,000 oz. of gold. The project also had an inferred resource of 4.6 million tonnes grading 4.42 g/t gold and containing 251,000 oz. Learn more at www.B2Gold.com.