VANCOUVER – Lundin Gold has announced the first export of gold concentrate and doré from Ecuador with the first shipment of 180 […]
By Magda Gardner December 16, 2019 At 2:01 pm 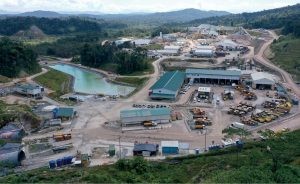 Lundin Gold’s Fruta del Norte mine in Ecuador. Credit: Lundin Gold[/caption] VANCOUVER – Lundin Gold has announced the first export of gold concentrate and doré from Ecuador with the first shipment of 180 tonnes of concentrate departing the port on Dec. 8. “Our first shipment to Boliden’s smelting facility in Harjavalta, Finland, marks another milestone for Fruta del Norte and Ecuador, as this shipment represents the first export from a large-scale mining operation in Ecuador,” Ron Hochstein, the company’s president and CEO commented in a release. At the Fruta del Norte project, commissioning of the process plant is almost complete with the carbon-in-leach circuit operational. Ramp up is underway with full production from the plant expected in the second quarter of next year. The mine is expected to produce an average of 300,000 oz. of gold annually at all-in sustaining costs of US$583 per oz. Probable reserves for the project stand at 17.8 million tonnes grading 8.74 g/t gold for a total of 5 million oz with additional drill targets identified within the 16-km-long Suarez pull apart basin. For more information, visit www.LundinGold.com.