MEXICO – Results from the second phase of Minera Alamos’ drill program at its wholly owned Santana project in Sonora have expanded […]
By Magda Gardner June 11, 2020 At 3:39 pm 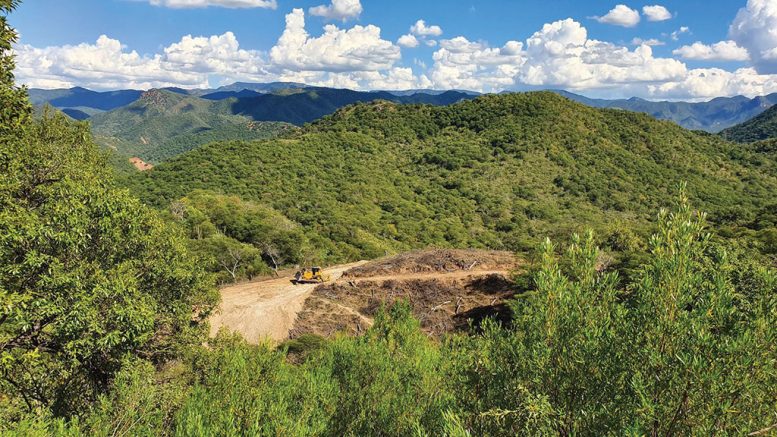 Santana project Credit: Minera Alamos[/caption] MEXICO – Results from the second phase of Minera Alamos’ drill program at its wholly owned Santana project in Sonora have expanded mineralization at the Nicho zone to the southwest and suggest potential for additional extensions at depth. The company’s most recent release includes eight drillhole assays – seven are from the Nicho zone while one is from the Divisadero target area. The highlights include 202.7 metres of 0.51 g/t gold in hole S20-141, which starts at surface and ends in mineralization, as well as 43.3 metres of 0.61 g/t gold in hole S20-138 and 42.5 metres of 0.36 g/t gold in hole S20-139. The 202.7-metre intercept indicates undrilled mineralization a depth, with deeper follow-up work planned, while the lower-grade 42.5-metre interval has returned gold assays from an area that is 100 metres southwest of prior drilling and increases the known strike of mineralization to 500 metres. “The phase 2 drill program at Santana has been extremely successful in demonstrating that the initial Nicho Main zone breccia pipe has significant potential for expansion,” Darren Koningen, the company’s CEO, said in a release. “We have now extended the lateral extents of the mineralized zone by almost 150 metres from what was identified previously and to overall vertical depths beyond 200 metres.” Koningen added that the mineralization remains open with a third phase of drilling planned to define the margins of the gold system at Santana. Minera Alamos also plans to test new targets at the site; these include the Zata, Gold Ridge and Bufita areas as the company’s technical team has gained a better understanding of the project’s geological history. This work will involve initial scout holes to understand the geometry of these zones, followed by definition drilling. Follow-up holes are also scheduled for Divisadero to obtain more information about this gold-bearing intrusive and Nicho remains a priority area for Minera Alamos. Overall, 6,000 metres to 7,500 metres of drilling is planned for the second half of this year as part of the third phase of exploration at Santana with potential to expand the program based on its initial results. “Should even a few of these targets exhibit the potential we have now seen at Nicho, it will be a transformative event for the Santana project and its future growth potential,” Koningen added. Minera Alamos started the second phase of drilling at Santana in August of 2019. The company is developing an open-pit, heap leach operation at Santana with mining expected to start in the fourth quarter of this year. The 85-sq.-km Santana project is road accessible with mine construction underway: the initial operation is forecast to generate approximately 25,000 oz. to 30,000 oz. of gold annually at an estimated capital cost of approximately $10 million. Construction activities started in January. The planned Santana mine would have a 5,000 t/d to 6,000 t/d design capacity. To date, the company has excavated approximately 50,000 tonnes of material at a recovered grade of 0.67 g/t gold as part of its test mining program. A maiden NI 43-101 resource estimate for Santana is expected in the second half of this year. Minera Alamos also holds the 62-sq.-km La Fortuna project in Durango state. For more information, visit www.MineraAlamos.com.