ONTARIO – New Gold of Toronto says it spent US$160 million during the second quarter on development at its Rainy River gold […]
By Marilyn Scales July 27, 2017 At 4:26 pm 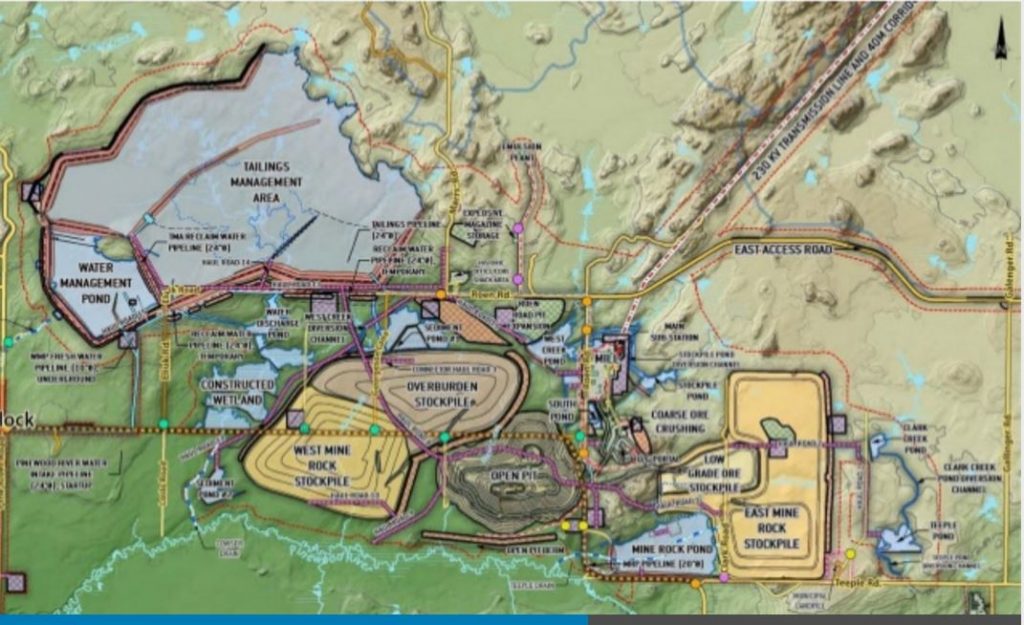 Site plan of the Rainy River mine and mill site. (Credit: New Gold) Site plan of the Rainy River mine and mill site. (Credit: New Gold)[/caption] ONTARIO – New Gold of Toronto says it spent US$160 million during the second quarter on development at its Rainy River gold mine and mill 80 km south of Kenora. Both the schedule and budget are on track as the project is expected to reach commercial operation in November 2017. Mining has begun and averaged 115,000 t/d over the second quarter, but during June it averaged 125,000 t/d. The primary crusher became operational on May 11. The ball and SAG mills were mechanically complete and turned over to the operating crew for commissioning. Elsewhere in the mill, mechanical, piping, electrical and instrumentation neared completion. The tailings pipeline was completed on June 15, with the water management pond going into service on June 20. New Gold has asked for an amendment to schedule 2 of the metal mining effluent regulations so that it may close two small creeks and create a tailings management area. Meanwhile, a starter cell that does not require a schedule 2 amendment is being built so that operations can start before the amendment is received. The starter cell is located within the larger tailings management area and will provide about six months’ of deposition. Projected spending during the current quarter will be US$229 million. The company says 45% of that is attributed to mining and owner’s costs, 45% to earthworks (including the starter tailings pond), and the balance to completion and commissioning of the mill. See www.NewGold.com  to read the Rainy River environmental assessment report or other details about the project.