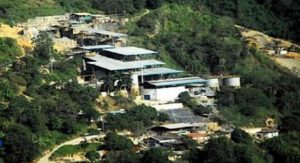 The Marmato project Credit: Gran Colombia Gold[/caption] COLOMBIA – Gran Colombia Gold released November production numbers for its Segovia and Marmato operations in Colombia. Last month, the company produced 21,835 oz. of gold, a new record. This year, the company expects to deliver production in the upper end of its 2019 guidance range of 225,000 oz. to 240,000 oz. All in sustaining costs are anticipated to come in below US$925 per oz. sold. The Segovia operation contributed 19,447 oz. in November where GCM processed an average of 1,347 t/d at an average head grade of 16.6 g/t. This year, the mine is expected to produce 201,000 oz. to 214,000 oz. of gold. Marmato produced 2,388 oz. in the month from milling an average of 941 t/d at 3.0 g/t. Total production this year from the asset is forecast at 24,000 oz. to 26,000 oz. of gold. Marmato spin off In September, Gran Colombia announced its intention to spin off the Marmato assets into a separate listed special purpose vehicle. The company would retain a major stake but would access the capital markets as a funding source for exploration and development at Marmato. In October, the company followed up with an announcement that it has entered into a letter of intent with Bluenose Gold with regards to the Marmato project. Based on the results of a preliminary economic assessment released in October, GCM plans to implement an optimized mine plan for the upper portion of the mine. It also envisions development of the Deep zone to increase gold production from the asset to the 150,000 oz. per year range by 2023. For more information, visit www.GranColombiaGold.com.