It’s been an eventful past couple of weeks in the uranium subsector, even if the spot price for uranium oxide has shown […]
By Robert Seagraves March 29, 2018 At 3:46 pm 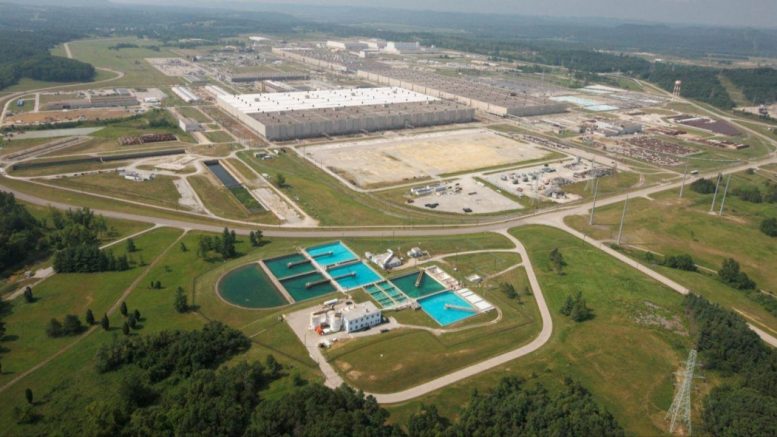 It’s been an eventful past couple of weeks in the uranium subsector, even if the spot price for uranium oxide has shown little positive response. In the U.S., the Trump administration’s Department of Energy (DOE) has suspended sales from its uranium oxide stockpiles for the rest of the government’s fiscal year (until Sept. 30, 2018). [caption id="attachment_1003722611" align="alignnone" width="457"] The Portsmouth gaseous-diffusion uranium enrichment facility in Piketon, Ohio. Credit: U.S. Department of Energy.[/caption] In a process dubbed “barter,” the DOE had been selling uranium from excess inventories for years to fund the environmental cleanup of the department’s former Portsmouth gaseous-diffusion uranium enrichment facility in Piketon, Ohio. The DOE had been bartering roughly 4.6 million lb. U3O8 equivalent annually to fund the Portsmouth activities and for downblending of highly enriched uranium from decommissioned nuclear weapons. This new suspension will remove 1.6 million lb. U3O8 equivalent from the market over the coming months. Energy Secretary Rick Perry has said he would prefer a complete halt to the sales, with the Portsmouth cleanup funded as an ordinary budget item. Perry told the Senate Natural Resources Committee on March 20 that the DOE’s uranium bartering process was poorly designed: “I’d like to see it stopped completely … our efforts should be focused on letting the uranium marketplace work as it should while continuing without disruption the important work that is taking place at the Portsmouth site.” The budget appropriates US$840 million for DOE expenses related to nuclear decontamination and remediation activities, which would include work at Portsmouth. The policy change on DOE uranium sales was contained in the US$1.3-trillion omnibus spending bill that was passed by both houses of Congress and signed by President Donald Trump on March 23. The DOE and U.S. Nuclear Regulatory Commission’s requests for appropriations to restart licensing for the proposed but politically contentious Yucca Mountain nuclear waste repository in southern Nevada were not included in the final draft of the budget, nor was the proposed funding for an interim nuclear waste storage program. The Uranium Producers of America association has long lobbied for the end of the DOE’s uranium barter program, and applauded the changes. The association noted that the 1.6 million lb. of uranium that will be kept off the market in the coming months is “more uranium than our entire domestic industry produced in 2017. At a time when our industry is providing less than 2% of the fuel needed to power our domestic nuclear reactors, halting DOE uranium transfers is the right policy, and we look forward to working with Congress and the Administration on a long-term plan for the inventory, as well as other actions to ensure we have a strong and stable domestic industry.” With the latest suspension of the DOE barter program and recent production cuts by major uranium miners such as Cameco and KazAtomProm, some 30 million lb. of annual uranium oxide supply has been taken out of the market over the past year. Meanwhile on the demand side in Japan, two more nuclear reactors have come back online after a virtual stasis in the country’s nuclear power industry since the 2011 Fukushima nuclear disaster. There are now seven reactors up and running in Japan, out of a total of more than 40 reactors. A Japanese district court also rejected a lawsuit to halt construction of the Ohma nuclear plant, which had been delayed since 2011 and is now due to come online by 2025. Unfortunately for uranium producers, there was little movement in the uranium spot price on all this good news, with prices still floundering below US$22 per lb. at press time.