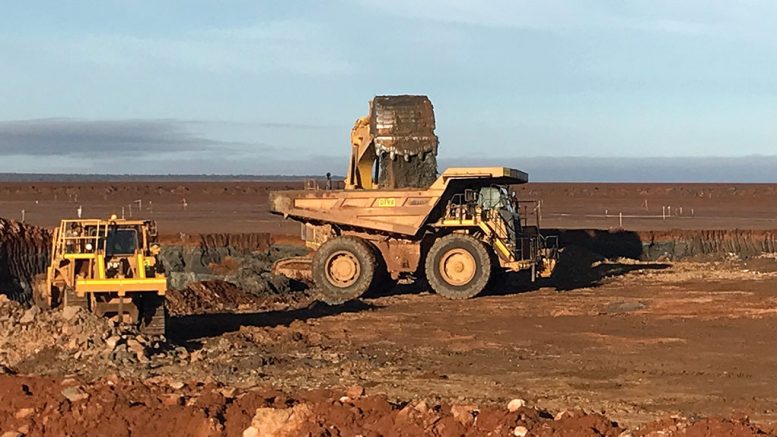 Stripping overburden at Higginsville Credit: RNC Minerals[/caption] AUSTRALIA – A recent gravity survey completed at RNC Minerals’ Higginsville gold operation (HGO) has delineated a 5-km long prospective structure located north of the HGO mill. This structure appears to run sub-parallel to the major regional shears which control the gold distribution in the region. “Although early-stage, our interpretation of the potential size of this new structure is an exciting development for our HGO-focused exploration activities,” Paul Huet, the company’s chairman and CEO said in a release. “With the Morgan Stanley royalty recently renegotiated in December 2019, it now makes sense to explore these and many other areas across the Higginsville tenement package which holds strong potential for new discoveries.” RNC plans to complete follow-up reverse circulation drilling this year to test this new structure. In addition, the company has announced that it has received government approvals for Stage 2 of the Baloo open pit at HGO. Mining of Stage 1 is expected to be completed in June. RNC expects to mine Baloo in conjunction with additional open pits within the Higginsville holdings; mining at the Fairplay North pit has started with ongoing drilling to define a production pipeline. In December, RNC announced that it had restructured a royalty on the property, to a 2% net smelter return (NSR), from a 1.75% NSR and a 50% participation payment on the difference between the realized gold price and a legacy rate of A$1,340 per oz. previously. The first 10,000 ounces sold in a year remain subject to a 1.75% NSR plus a reduced participation payment of 27.5% on the gold price differential. In June, RNC completed the US$35-million HGO acquisition which added a 1.4-million-t/a operating mill to its portfolio. The company also holds the Beta Hunt underground mine which is within trucking distance of the HGO mill. This year’s production guidance stands at 90,000 oz. to 95,000 oz. of gold at all-in sustaining costs of US$1,050 to US$1,200 per oz. For more information, visit www.RNCMinerals.com.