NEW YORK CITY – S&P Global Market Intelligence is bullish on gold. Its latest report says there will be further growth of […]
By Marilyn Scales April 16, 2019 At 4:32 pm 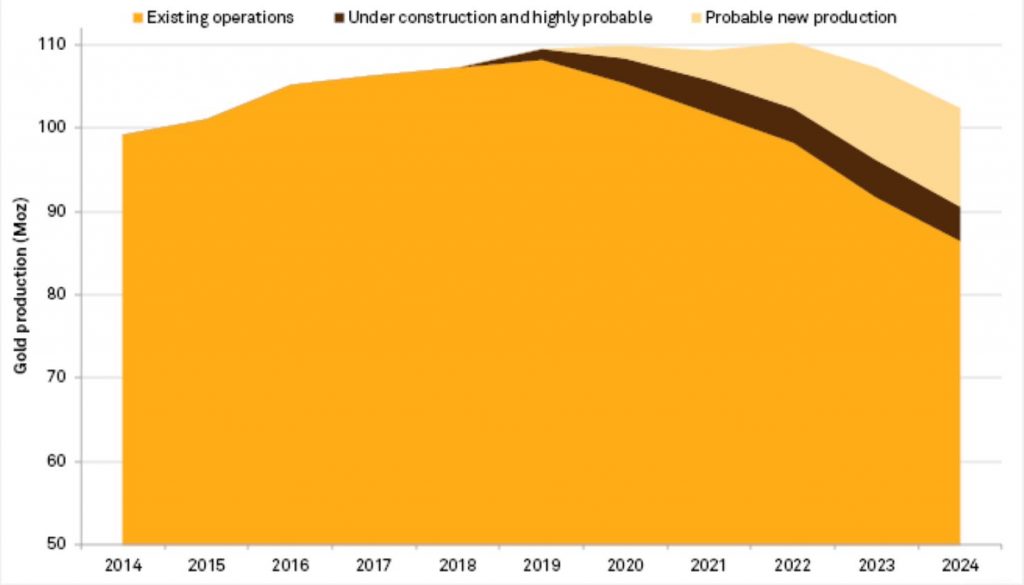 Gold production from new and existing sources, 2014-26. (Image: S&P Global)[/caption] NEW YORK CITY – S&P Global Market Intelligence is bullish on gold. Its latest report says there will be further growth of 2.3 million oz. in 2019. In 2018 for the 10th consecutive year, gold output grew to 107.3 million oz. The new high is expected to be 109.6 million oz. from both new and existing sources. S&P noted that the year-over-year increase was just under 1% (the smallest in the last decade), but output has risen 40% since 2008. Research analyst Christopher Galbraith said, "We believe the forecast growth of 2.3 million oz. in 2019 will be the strongest growth in the past three years, debunking commentary calling for peak gold. More than half of the increase is projected to come from new mines that are expected to come on-stream this year or have recently commissioned." He went on to say that output is expected to stay steady until 2022, but from there on it will fall by over 3 million oz. in 2023 and up to 5 million oz. in 2024. During that time, Canada will be the only country to increase output, and Australian production is expected to fall the most. Several Canadian mines, including Agnico Eagle Mines' Meliadine and New Gold’s Rainy River, are driving growth in national output that is expected to last for a few years. S&P projects that the increase will push Canada past the United States in gold production in 2019 to become the world's fourth largest gold producer. Very few Canadian gold mines face depletion, and the country's output is expected to increase by four times the second largest increase, by Ecuador, over the next five years. Ecuador's projected increases come from a handful of new projects, including Lundin Gold's Fruta del Norte and INV Metals' Loma Larga. The full scope of S&P’s analysis of various sectors is available at www.SPglobal.com.