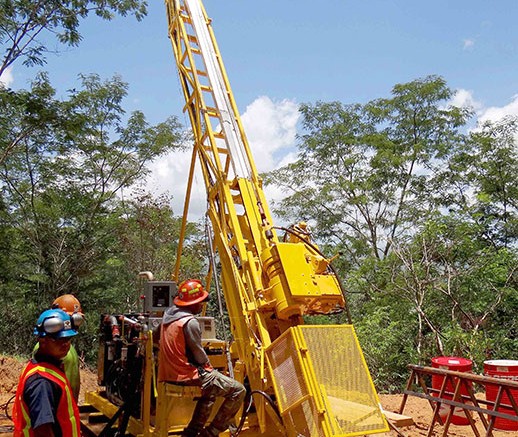 Drilling at Candelones Extension Credit: Unigold[/caption] DOMINICAN REPUBLIC – Unigold has released an intercept of 50 metres averaging 4.19 g/t gold, 15.6 g/t silver, 0.26% copper and 1.5% zinc from the Candelones Extension deposit at its 226-sq.-km Neita concession. This intercept includes a higher-grade section of 9.5 metres grading 14.14 g/t gold, 46.6 g/t silver, 0.26% copper and 3.2% zinc. The hole targeted near-surface mineralization. “This hole delivers the first results from Target C for this drill campaign and follows from the high-grade results intersected at both Targets A and B,” Joe Hamilton, the company’s chairman and CEO, said in a release. “While this intercept is certainly remarkable, our re-logging of historical holes in this area has identified areas of anhydrite stockwork similar to what has been observed 800 meters to the east overlying the massive sulphide mineralization at Target A. These anhydrite stockwork zones seem to overlie the highest grade mineralization and imply that further mineralization may be discovered around Target C where drilling is sparse." Targets A, B and C all lie within the Candelones Extension resource area; the latest drillhole intersected mineralization at Target C at approximately 75 metres below surface. Unigold estimates that the true thickness of the mineralization is 45 metres with an average gold-equivalent grade of 5.38 g/t. The zone is open to the north and at depth and features a high-grade core. At the end of February, the company released results from Targets A and B at Candelones Extension, which extended the two zones. A resource estimate completed in 2013 for the Candelones deposits outlined inferred open pit oxide resources of 3.6 million tonnes at 0.98 g/t gold for a total of 112,000 gold oz. Inferred open-pittable sulphide resources came in at 30.2 million tonnes at 1.5 g/t gold for a total of 1.46 million oz. of gold. An additional report released in 2015 estimated inferred sulphide resources for underground extraction of 5.3 million tonnes grading 5.27 g/t gold for a total of 894,000 gold oz. Current resources are contained within the Candelones Extension, Main and Connector deposits. For more information, visit www.UnigoldInc.com.