Geosynthetic clay liners (GCLs), used for over 25 years as a substitute for the compacted clay component of composite liners in industrial […]
By Canadian Mining Journal Staff December 7, 2020 At 11:58 am 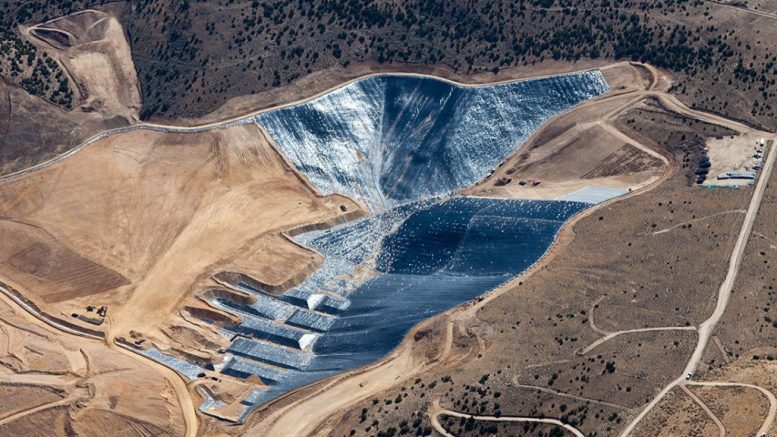 Geosynthetic clay liners (GCLs), used for over 25 years as a substitute for the compacted clay component of composite liners in industrial applications, are gaining momentum in industrial waste disposal and ore processing applications.

These applications include liners for tailings dams and heap leach pads as well as in caps and cover systems. GCLs are a sustainable choice in that they can reduce the carbon footprint of a project due to lower fuel consumption involved in transporting and compacting bulk clay.

The use of GCLs also embody more environmentally responsible design, as they can minimize the risk of leakage, and much of the reason why a tailings dam fails is due to instability caused by seepage, says Dr. Michael Donovan, CETCO’s Global Research and Development Director.

The series offers world-class performance against calcium chloride (CaCl2) as part of a comprehensive portfolio of solutions to address a wide spectrum of leachates.

“CETCO continues to improve its products to not only withstand aggressive leachates, but to also improve its internal shear strength for steeper slopes – both of which are often found in mining applications,” says Donovan.

The new GCL should allow for more flexible engineering of the liner system to improve the economics of cell design, and the RESISTEX Universal GCL series provides optimal performance against calcium chloride, making them a comprehensive choice for most leachates, and for accelerating the leachate compatibility evaluation process.

CETCO’s RESISTEX Universal GCL technology can withstand aggressive, high strength mining leachates. “We are not aware of any other geosynthetic clay liner products on the market that can withstand [the] low PH conditions used in copper, nickel, and uranium mining,”  Donovan says.

Stronger internal shear performance enables designers to make steeper slopes, which allow cells to accommodate more waste. The steeper the slope the more waste can go in, which Donovan says translates to savings with a stronger, more stable product.

Donovan relates that a concern for civil engineers in waste storage sites are geotechnical properties, and says product formulations and manufacturing process allows them to maximize the internal bonding strength and tensile properties of the material, which, in turn, allows engineers to consider more economical cell designs.

RESISTEX GCLs utilize a patented polymer technology that provides protections against the worst of the worst, Donovan says.

GCLs are comprised of sodium bentonite clay. When wet, the clay forms a barrier with very low leakage rates.

The RESISTEX GCL product family takes that concept one step further by adding special polymers along with the clay to form an even better hydraulic barrier, including for leach heaps.

“If you look at mining applications, generally the salt concentrations of the tailings are a lot more aggressive than what you would find coming out of a landfill.”

With the new formulations, CETCO can reduce the total mass of active material within the product without comprising its performance. Typically, GCLs are designed to a minimum specification of 0.8 pounds per square foot. The new RESISTEX Universal GCL series can be as low as 0.5 pounds per square foot while maintaining better hydraulic performance against leachates with an ionic strength of approximately 0.1 mol/L.

The product rolls can be longer with a lower delivered cost, especially for remote sites, as more square footage can fit on a truck or in a container.

Another advantage, Donovan says, is install costs should be less.

“We work with customers to tailor the polymer clay formulation specifically to their leachate, delivering the most efficient product for their projects.”

With facilities across the world, including 12 R&D centers, CETCO is equipped to offer customers one-on-one support to develop the best product for their site’s needs.

The preceding Joint-Venture Article is PROMOTED CONTENT sponsored by CETCO and presented in partnership with MINING.COM. Visit CETCO for more information.