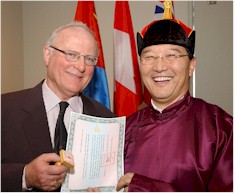 Steve Vaughn (left) and Dr. Galsan Batsukh at the opening of the Mongolian Consulate-General in Toronto

MONGOLIA's Ambassador to Canada, His Excellency Dr. Galsan Batsukh, officially opened the Mongolian Consulate-General in Toronto on Dec. 4. Steve Vaughn, a partner at McMillan Binch LLP, was named Honourary Consul General in recognition of his role in establishing the new office. He will be responsible for consular activities, technical exchange, and investment in Mongolia's mining industry.

Terry Rogers is now senior vice-president and COO at CAMECO CORP., and he will report to Gerald Gandey, the newly named CEO. Rogers was president of Kumtor Operating Co., Cameco's gold subsidiary in Kyrgyzstan. Now he is responsible for all Canadian and international uranium mining and processing operations plus oversight for operational and technical aspects of the company's gold investments. Effective Jan. 15, 2003, the new president of KUMTOR OPERATING COMPANY will be Andrew Lewis. Lewis has 20 years of mining experience in Bulgaria, Spain, the Philippines, and the United Kingdom. He is a graduate of the Royal School of Mines and the Cranfield School of Management.

RICHMONT MINES has a new president and CEO, Louis Dionne. Jean-Guy Rivard has stepped down to make way for him, but Rivard will continue as chairman of Richmont. Dionne comes from Barrick Gold where he held positions including vice-president and senior vice-president, underground operations.

MAZARIN INC. regretfully announced the death of Jean Dupre, president and CEO of LAB CHRYSOTILE on Dec. 5. Mazarin, through two subsidiaries, holds an interest in LAB.

Gerald P. Gauthier, PEng, has joined GLENCAIRN GOLD CORP. as vice-president of operations. He was part of the teams that built the Williams gold mine at Hemlo, Ont., and the Lluvia de Oro heap leach mine in Mexico.