ONTARIO – Canada Nickel Company has discovered a palladium and platinum-bearing zone, situated to the north of the nickel-cobalt deposit within its […]
By Magda Gardner April 7, 2020 At 3:24 pm 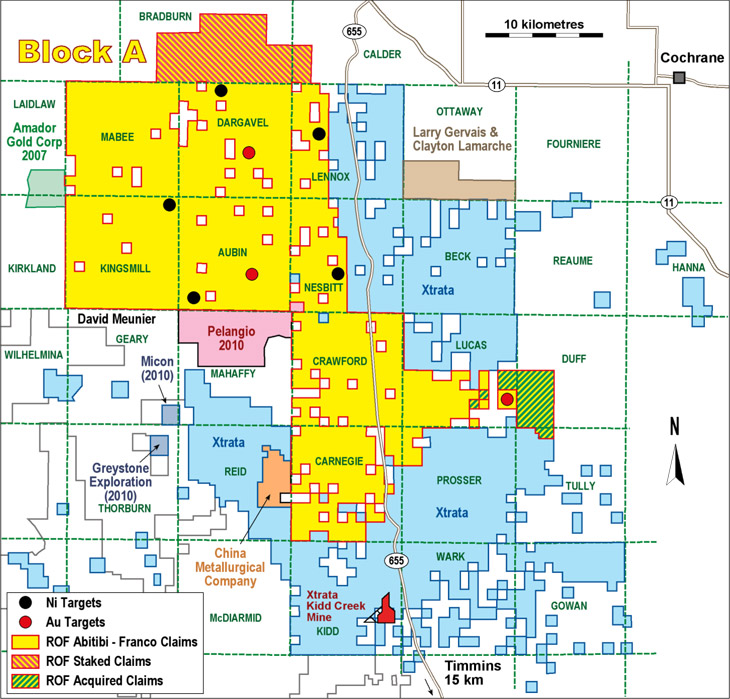 Crawford project and surrounding areas Credit: Noble Exploration[/caption] ONTARIO – Canada Nickel Company has discovered a palladium and platinum-bearing zone, situated to the north of the nickel-cobalt deposit within its wholly owned Crawford project. Five holes intersected this zone, returning intercepts that include 7.5 metres of 1.7 g/t palladium and platinum as well as 13.5 metres of 0.8 g/t palladium and platinum. Drilling traced the zone over 600 metres of strike and from the bedrock contact down to a depth of 500 metres. “The discovery of this new near-surface multi-gram palladium-platinum zone sitting parallel to Crawford’s existing nickel-cobalt-palladium resource further underscores Crawford’s significant potential and provides additional optionality to unlock value for shareholders,” Mark Selby, the company’s chairman and CEO, said in a release. “With less than 20% of the main structure drilled and multiple targets on the property, we look forward to the next phase of exploration where we will begin to explore the main nickel-cobalt-palladium and PGM zone across the 8 km strike length of the structure." Drilling to date has traced the mineralized structure at Crawford over a strike length of 1.7 km. In addition, Canada Nickel released the results of three holes targeting nickel-cobalt mineralization: one of these intercepted 317 metres of 0.22% nickel and 0.003% cobalt, extending the higher-grade zone at Crawford by 130 metres westward. In March, the company tabled a maiden resource estimate for Crawford, with 600.4 million tonnes in the measured and indicated category grading 0.25% nickel and 0.013% cobalt for a total of 1.53 million tonnes of nickel and 78,000 tonnes cobalt. Additional inferred resources stand at 310.5 million tonnes grading 0.23% nickel and 0.013% cobalt. The deposit includes a higher-grade core with 262.8 million tonnes in the measured and indicated category at 0.31% nickel and 0.013% cobalt and 66.4 million inferred tonnes at 0.29% nickel and 0.013% cobalt. The Crawford project is nearby Glencore’s Kidd operations, one of the world’s deepest base metals mines. For more information, visit www.CanadaNickel.com.