After closing a $12-million private placement in mid-August, Nighthawk Gold is looking to triple the metres drilled at its Indin Lake gold […]
By Alisha Hiyate August 31, 2020 At 1:42 pm 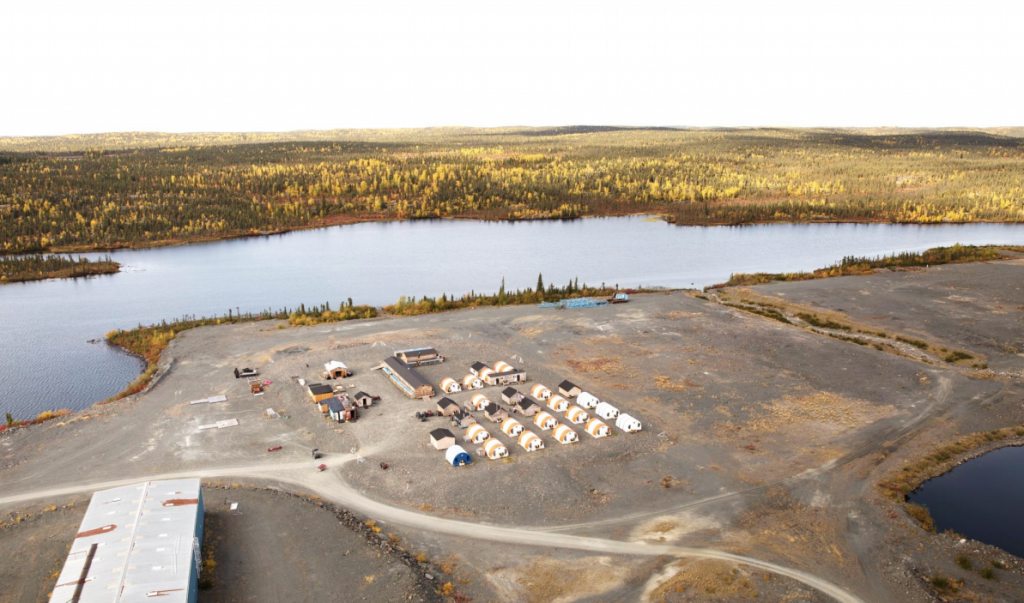 The camp at Nighthawk Gold's Colomac gold project in the Northwest Territories. Credit: Nighthawk Gold[/caption] After closing a $12-million private placement in mid-August, Nighthawk Gold is looking to triple the metres drilled at its Indin Lake gold project in the Northwest Territories next year, with up to 75,000 metres planned using five drill rigs. The program, which will start this fall, marks a big step up from this year's ongoing program of 25,000 metres using three drill rigs. In preparation, the Toronto-based junior will expand camp facilities this year, adding a second core shack and a larger generator to support up to five drills needed for the campaign. Nighthawk's 2020 exploration program began in late March, but was suspended between April and mid-July due to COVID-19 restrictions. Exploration at the 899-sq.-km Indin Lake property, 200 km northwest of Yellowknife, is focused on the Colomac project, at the as well as the high priority regional targets Leta Arm and Treasure Island. “At Colomac this year, we have focused drilling on areas lying immediately outside of the current resource, identified as the Exploration Target, where the opportunity exists to add upwards of 1.5 million ounces to the current resource,” said Nighthawk's president and CEO, Michael Byron, in a release. “This would require anywhere from 50,000 to 75,000 metres of drilling, and we are on track to complete 20,000 metres at Colomac in 2020. With five drills in operation, we could complete up to 75,000 metres of drilling in 2021 which would allow us to greatly accelerate resource growth opportunities within the Colomac Main and Goldcrest sills and test some of the other targets within the Colomac gold project area, some of which have never been drilled by us.” Byron noted that both Leta Arm, 16 km southwest of Colomac, and Treasure Island, 11 km north of Colomac, lie within large deformation zones with favourable geology and that none of the Colomac systems have been tested below 200 metres depth. Nighthawk released an updated resource for Colomac in July. Combined open pit and underground resources in the indicated category are 25.9 million tonnes grading 2.01 g/t gold for 1.7 million oz.; in the inferred category, the deposit holds 5.7 million inferred tonnes grading 2.03 g/t gold for 372,500 oz. In addition, the company posted a maiden underground resource for the Damoti deposit, 28 km south of Colomac, of 736,000 inferred tonnes grading 4.97 g/t gold for 117,800 oz. The Colomac project saw past production in the 1990s of over 500,000 oz. gold from several open pits. For more information, visit nighthawkgold.com.