Copper, often called the bellwether metal as a barometer of global economic health, is a metal vital to the green energy transition. […]
By MINING.COM Staff February 17, 2022 At 3:17 pm 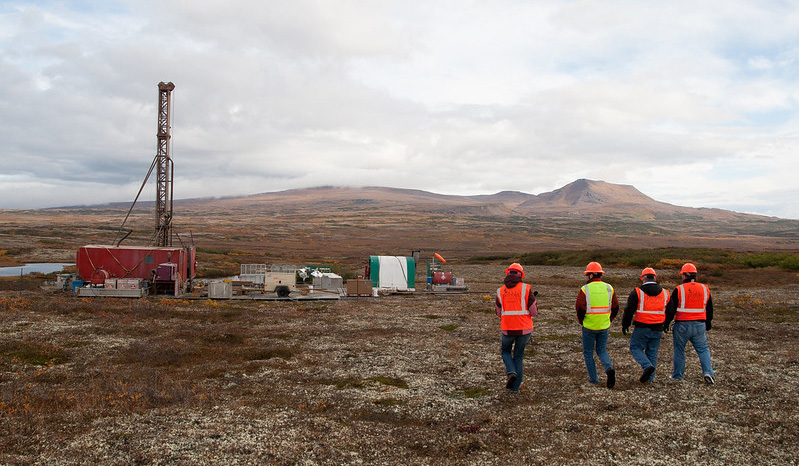 Copper, often called the bellwether metal as a barometer of global economic health, is a metal vital to the green energy transition. Demand has been growing for the red metal, and energy and metals researcher Wood Mackenzie expects end-use copper demand from passenger EVs to jump to around 2.9 million tonnes over the next decade from about 600,000 tonnes in 2021.

For a snapshot of the copper supply chain of tomorrow, MINING.COM and sister company Miningintelligence compiled a list of the top 10 largest undeveloped copper projects and ranked them according to copper resources in the measured and indicated and inferred categories.

Based on our criteria, we excluded Udokan Copper’s Udokan in Russia, Zijing’s Timok in Serbia and Anglo American’s Quellaveco in Peru, which have moved into the construction and commissioning phases.

Northern Dynasty Minerals’ Pebble project in the Bristol Bay region of Alaska leads the list by a distance, containing 37.18 million tonnes (mt) of copper. Pebble has been plagued with controversy, delays and environmental opposition over the years, and the project’s key water permit was formally rejected by the US Army Corps of Engineers last year.

This year, the Biden administration said it will relaunch a process that could permanently protect Bristol Bay from development. The decisions are currently being challenged by Northern Dynasty Minerals, and in October 2021 the company released a preliminary economic assessment. If permitted, Pebble would be North America’s largest mine.

Rio Tinto and BHP’s Resolution copper project in Arizona comes in second with a 27.7 mt copper resource. The world’s top two miners have spent $2 billion over 26 years trying to launch Resolution into production, but have faced continued opposition from Native American groups and environmentalists. A 2014 decision by former President Barack Obama and Congress set in motion a complex process to give Rio federally owned Arizona land that contains more than 40 billion pounds of copper and would be one of the world’s largest underground mines.

Rio Tinto’s La Granja property in Peru is in third place with 22.06 mt of copper. Rio Tinto acquired La Granja over 12 years ago, but renewed the concession in 2019 and paid $5m to continue exploring. The same year, it was rumored that Rio may team up with First Quantum to develop the mine.

Seabridge Gold’s Kerr-Sulphurets Mitchell (KSM) project in British Columbia is in fourth place with 21.25 mt of copper. The $5.3 billion project hosts four mineral deposits that will be operated as a combined open-pit and underground mine. Late last year, Seabridge announced its plans to reshape KSM by integrating the Snowfield porphyry deposit, acquired from Pretium Resources in December 2020.

Teck and Newmont’s Nueva Unión 50/50 joint venture in Chile takes fifth place with a 16.69 mt copper resource. The project is located in the Atacama region, and annual copper production is estimated at 224,000 tonnes during first 5 years of production.

The Tampakan deposit on the Philippine island of Mindanao is in sixth place with 15.25 mt of copper. Sagittarius Mines is seeking local approval for the proposed mine, which is estimated to yield an average of 375,000 tonnes of copper a year over a 17-year mine life.

Glencore’s El Pachón copper and silver project in San Juan Province Argentina takes the seventh spot with a 15.04 mt resource. Glencore acquired the project from Xstrata Copper – El Pachón is a major long-life development project with the potential to initially produce 400,000 tonnes of copper per year.

McEwen Mining formed a new company, McEwen Copper, to advance the 13.42 mt Los Azules project in Argentina. The first thing the company said it intends to do is construct a new, low-altitude northern access road to provide year-round access to the site. The current exploration road is only passable about five months a year.

Angofagasta’s beleaguered Twin metals project in Minnesota rounds out the top ten with 12.96 mt of copper. The company has asked US officials to reconsider a proposed 20-year ban on mining in Minnesota’s Boundary Waters region, a plan announced last fall that would block Twin Metals altogether.