New habits can sometimes be even harder to break than old ones. But the employees of AMEC are up to the challenge. ...
By Canadian Mining Journal Staff January 15, 2006 At 5:00 pm 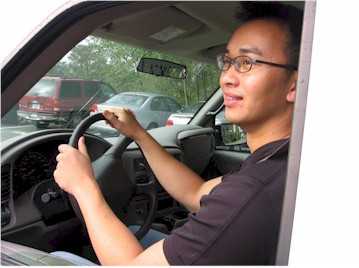 Nathan Nguyen, mining environmental specialist with AMEC, asks other drivers to concentrate on their driving.

New habits can sometimes be even harder to break than old ones. But the employees of AMEC are up to the challenge. AMEC is an international project management and engineering services company. All 44,000 of its employees have pledged not to use cell phones, BlackBerries, and other wireless devices while driving.

"This is about safety," states AMEC's Doug Annable, president (Energy & Mining), who states that the company's ban has received a positive response by employees. "It tells our employees that we care about their well-being."

AMEC is heavily involved in remote mining operations around the world and admits that at any given moment they have hundreds or thousands of employees on the road.

Wireless devices are vital tools for business nowadays, and AMEC seems to be in every aspect of engineering, from energy and industrial projects to those involving infrastructure and the environment. Furthermore, many of AMEC's project managers, engineers, and scientists consider themselves techno-junkies; they are among the first to have the latest gadget and gizmo.

Annable states that a poignant presentation about a young widow and her husband's final call to her, before a traffic accident claimed his life, influenced the company's management to create the policy. Although the woman is not connected with the company, AMEC felt that a proactive policy would be consistent with the company's overall business approach. It is consistent with AMEC's approach to safety, which has helped it earn, once again, the No.1 ranking on the Dow Jones World Index for Sustainability.

As a result of this new practice, some employees have put together a few suggestions to help others break the habit of driving while under the influence of a wireless device.

1.Plan ahead call and send before leaving your desk or getting into your car.
2.Purchase a new CD to play in the car. Looking forward to listening to this new music will help break the addiction.
3.Select relaxing music when you are in bumper-to-bumper traffic, thus helping reduce your frustration of 'not accomplishing anything'.
4. Don't foolishly believe that text messaging while at a stoplight is safe; most accidents occur at intersections.
5.Unfasten (or turn off) your Blackberry, thus removing the vibrating beast from seducing you to look at it.
6.Turn your phone off; simply having it on and ringing will generate anxiety and a desire to look and see who called.
7. Heavily tempted? Put your wireless devices in your briefcase, and put the briefcase in the trunk.
8.Ensure that those who regularly call, e-mail, and text message you know that you are not available while in transit.
9.Incorporate "I'm either in a meeting or driving" into your cell phone's outgoing voicemail, letting your clients and friends know driving safely is important to you.
10.Encourage other addicts to hang-up; similar to people who quit smoking, it is okay to be a strong advocate to others to create social change.


John Kageorge is a communications manager at AMEC, based in Vancouver. He can be reached at 604-617-4745, or [email protected], but don't expect him to answer while he's driving!