CMJ takes a look at some of the most active exploration projects in Quebec. 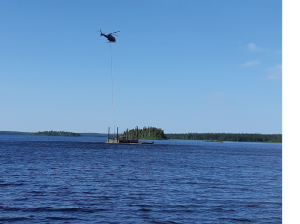 A combination of prospective geology, a mining–friendly culture, and generous exploration incentives have made Quebec a popular destination for explorers. A climbing gold price has made it especially so for precious metals juniors.

In September, Amex Exploration added four drill rigs at its Perron property and increased the program to 300,000 metres from 100,000 metres. The junior is working toward a maiden resource at Perron, located 110 km north of Rouyn-Noranda, near the village of Normétal.

The $21-million program includes 40,000 metres completed last year, and at least 60,000 this year and should be completed in November 2021. The program is focused on exploration between known gold zones that have been identified along 3 km of strike along the Perron gold corridor, to test continuity of mineralization.

Of the 10 drill rigs at work at Perron, six will continue to define the Eastern Gold zone, including the depth extension of the HGZ targeting mineralization at 1.5 km depth. Two will focus on outlining a bulk-tonnage, near-surface zone at the Denise zone. Two drill rigs will be assigned to the Grey Cat and Gratien zones to continue to define near-surface mineralization; and the last two will be dedicated to exploration.

In preparation for a preliminary economic assessment (PEA) in early 2021, Bonterra Resources is planning to complete 91,000 metres of drilling this year across its Urban-Barry camp projects, 200 km northeast of Val-d’Or. The eight-rig drill program is focused on both expanding the three high-grade Moroy, Gladiator and Barry deposits and testing new targets. A resource update should be complete late this year, or early 2021.

Bonterra is also conducting a 10,000-tonne bulk sample (up from 5,000 tonnes originally planned) at its Moroy project, focused on confirming grade continuity in the M1 shear zone, 440 metres below surface, and reconciling the resource grade to the recovered ounces.The zone is being accessed via an existing exploration drift starting from the Bachelor shaft, 900 metres north of Moroy. The sample will be processed at Bonterra’s Bachelor mill under the supervision of a third-party engineering firm, with results expected in the fourth quarter.

The company is also planning a mill expansion from 800 t/d to 2,400 t/d, with construction starting in the spring of 2022 following detailed mill and tailings design, PEA and feasibility studies and permitting.

Probe Metals has 90,000 metres of drilling planned for 2020 across its Val-d’Or East project, located near Val-d’Or, in preparation for a resource update in early 2021, followed by a preliminary economic assessment.

The company has defined deposits occurring along two parallel trends (Courvan and Pascalis) at Val-d’Or East, and has been particularly excited by results from the Monique trend, which lies only 5 km southeast of the main New Beliveau deposit on the property.

The company consolidated its ownership of Monique in March, with the acquisition of a 60% stake in the past-producing open pit project from Monarch Gold. It now owns 100% of the 5.5-sq.-km project, which is part of Val-d’Or East.

Recent drill highlights from Monique include the discovery of the new, near-surface P gold zone, which returned 22.5 metres of 1.4 g/t gold; and 24.5 metres of 4.1 g/t gold, including 9.5 metres of 9.2 g/t gold, under the former Monique pit.

The property hosts several past-producing mines and falls along four regional mine trends, including 14 km of strike length along the Cadillac Break. Probe expanded its land package to 435-sq.-km (from 334 sq. km) in May, after staking new claims based on regional exploration work that identified prospective gold structures.

Radisson Mining Resources is conducting a fully funded 60,000-metre drill program at its past-producing O’Brien project, with plans to extend the program to 75,000 metres into 2021.

Three drills are currently turning at the project, located halfway between Rouyn-Noranda and Val-d’Or, with the aim of growing resources. Recent results from O’Brien suggest the company has found a third, high-grade mineralized trend, 900 metres east of historic workings. The other previously intercepted trends are 300 and 600 metres east of the workings. High grade hits from the most recent find included 2.1 metres of 45.86 g/t gold from 500 metres vertical depth, and 2 metres of 21.29 g/t gold from 260 metres depth.

The resource is mostly within a strike length of 1.5 km and a depth of 550 metres; however there is potential for expansion with an overall prospective strike length of 4.5 km and typical depths in the camp of more than 1.1 km.

The O’Brien project is within the Bousquet-Cadillac mining camp in Quebec’s Larder Lake-Cadillac break. The former O’Brien mine at the site generated 1.2 million tonnes at 15.25 g/t gold between 1926 and 1957.

Radisson recently expanded its claims in the camp nine-fold to 58.4 sq-km by acquiring the New Alger property from Renforth Resources. The two companies have also entered a strategic partnership. The acquisition of New Alger, adjacent to O’Brien, allows Radisson to expand its exploration efforts to the west of the historic mine.

After a merger between Auryn Resources and Eastmain Resources closes (expected in October), the resulting company, Fury Gold Mines, will start a 50,000-metre exploration program at the Eau Claire project, 80 km north of Nemaska.

The drill program, which will be focused on growing resources, is slated to begin in the fall and continue through 2021. The stated goal is to develop Eau Claire into a 150,000-200,000 oz. gold per year producer.

A May 2018 preliminary economic assessment outlined a 12-year mine life for Eau Claire with average annual production of 79,200 oz. gold from an open pit/underground project.

With a preproduction capex of $175 million, the project’s after-tax net present value was calculated at $260 million (at a 5% discount rate), with a 27% internal rate of return. Average all-in sustaining costs were estimated at $746 per oz.

O3 Mining is planning a 40,000-metre drill program at its Marban gold project, where a preliminary economic assessment completed in September outlined a potential 15-year, 115,000-oz.-per year mine.

The drilling will test extensions of current resources, upgrade resources from inferred to indicated, and test greenfield targets.

A prefeasibility at the project, located on its Malartic property, midway between Val-d’Or and Malartic, is now under way.

The PEA outlined an 11,000 t/d open pit operation with mining at five deposits at Marban. With an initial capex of $256 million, the early stage study projected an after-tax net present value of $423 million (at a 5% discount rate) and a 25.2% internal rate of return.

Mining would only take place for 13 years, with production over the last two years based on processing of low-grade stockpiled material.

QMX Gold is planning a 36,000-metre drill program this year at its Bonnefond deposit, near Val-d’Or, and plans to release an updated resource for the project this fall.

Bonnefond is located in the Val-d’Or East zone of QMX’s 200-sq.-km land package, which is divided into four zones (East, Central, Southwestern and Bourlamaque).

After releasing a positive PEA for its Troilus project, 170 km north of Chibougamau, in September, Troilus Gold is following up with a 20,000-metre drill program focused on upgrading and expanding resources.

The 1,070-sq.-km project, located in the Frotêt-Evans Greenstone belt, hosts the past-producing Troilus mine.

Earlier this year, Troilus discovered the Southwest Zone, with some of the best drill results ever from the property, including 73 metres of 1.56 g/t gold equivalent. The zone, located 3.5 km southwest of the main 787 zone, contributed 583,000 gold-equivalent ounces to a July resource update, and the company believes the SWZ has potential for more near-surface, higher-grade material that could have a positive impact on future mining scenarios.