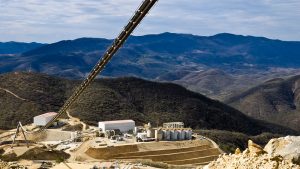 TORONTO – Mexican-focused producer Torex Gold released its second quarter financial results and updated production guidance for the year: with 59,508 oz. generated in the quarter, the company now expects to produce 390,000 oz. to 420,000 oz. of gold this year.

Torex’s original guidance was for 420,000 oz. to 480,000 oz. of gold. However, following a COVID-19-related decree from the Mexican government, production at its El Limon Guajes complex was suspended in April. Processing resumed in May and full production restarted by June.

The company recorded all-in sustaining costs (AISC) of US$1,015 per oz. in the quarter – excluding US$8 million of costs related to the COVID-19 suspension – and expects its AISCs for the year to come in between US$965 per oz. and US$1,025 per oz. This compares with prior AISC guidance of US$900 to US$960 per oz.

“While this quarter was far from business as usual, we delivered solid operational performance and demonstrated the financial strength of our business even in these most challenging times,” Jody Kuzenko, the company’s president and CEO, said in a release. “With operations back on track, US$176.9 million in the bank and a robust gold price at hand, we plan to direct our cash flow to further reducing debt during the second half of 2020.”

Kuzenko added that in the second quarter, the company generated US$28.1 million in operating cash flow (before changes in working capital) and produced 42,630 gold oz. in July, compared with 38,890 oz. in June.

Adjusted net earnings for the quarter stand at US$3.6 million, based on an adjusted EBITDA (earnings before interest, tax, depreciation and amortization) of US$49.3 million.

Torex closed out the quarter with US$176.9 million of unrestricted cash – the company repaid US$21.7 million of debt in the second quarter and drew down US$90 million from its revolving credit facility, for a total debt position of US$225.2 million at the end of June. it expects to be in a net cash position before year-end.

In the release, Torex also stated that enhanced COVID-19 measures remain in place at El Limon Guajes – to date, it has recorded four cases of the virus among its workforce. This includes three employees who displayed symptoms and tested positive away from site and are now recovered, as well as one individual who tested positive at the site and is now quarantined, based on the company’s COVID-19 protocols.