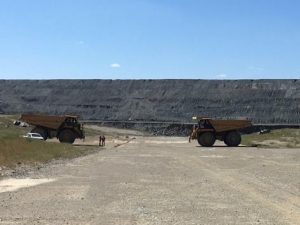 Magna Gold has released the results of a preliminary feasibility study (PFS) for its San Francisco mine, acquired earlier this year, in Mexico’s Sonora state. The study suggests a 16,875 t/d heap-leach operation, using existing processing capacity, generating an average of 69,000 gold oz. per year between 2021 and 2027 at AISCs of US$1,204 per oz.

As the 474-sq.-km site includes mining and processing equipment and infrastructure, there are no major capital requirements to resume full mining operations, according to the study. Development capital costs are pegged at US$3.4 million.

The PFS outlines an eight-year operation, with ore mainly sourced from the existing San Francisco and La Chicharra pits, with a minor contribution from an underground development, which would target higher-grade lenses in the south wall of San Francisco. The life-of-mine sustaining capital cost estimate stands at US$19.8 million.

Magna is currently processing material from the La Chicharra pit, as well as previously stockpiled mineralization as it looks to re-start open pit operations at San Francisco.

According to Arturo Bonillas, Magna’s president and CEO, the PFS “validates our view of value and leverage for San Francisco when we acquired the mine earlier this year.”

In a release, Bonillas also highlighted how the study lays the groundwork for an operating plan for the mine.

“This marks an important milestone for Magna as it provides us with a base-case operating plan from which we can drive ongoing optimization, growth, and near-term value creation.”

Along with the study results, Magna provided a mineral reserve estimate for the property, calculated at US$1,350 per oz. gold. Proven and probable reserves stand at 46.8 million tonnes, at 0.5 g/t gold, for a total of 752,000 gold oz. with a further 782,000 tonnes, at 0.26 g/t gold, in low-grade reserve stockpiles. Additional exploration is underway, both around the pits and at depth.

Magna acquired the 474-sq.-km San Francisco mine property, which includes two open pits and a 22,000 t/d heap leach processing facility, in May from Alio Gold – Alio was then acquired by Argonaut Gold in July. To acquire the asset, Magna issued 9.7 million of its shares to Alio on closing, with a further US$5 million in cash, or a 1% net smelter return royalty, due 12 months from closing.

In the past, the San Francisco mine experienced “significant operating challenges.” According to Magna’s corporate presentation, these included low metallurgical recoveries and large tonnage deviations from the mine plan. The open pit heap leach started up in 2010 and produced over 820,000 oz. gold between 2013 and 2017.

As part of an operational improvement plan put in place after the acquisition, the company is completing a metallurgical testing program and evaluating an upgrade of the crushing and leaching operation to potentially increase throughput and improve recoveries.