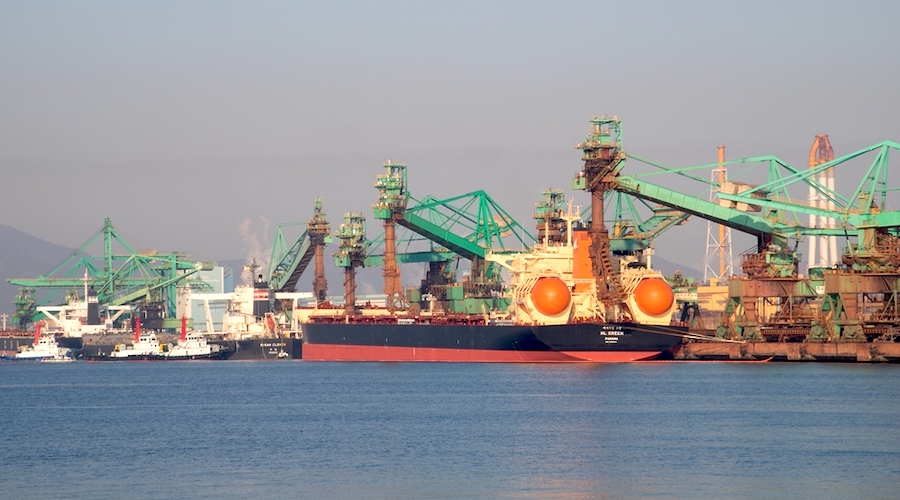 BHP (ASX: BHP) has taken a key step towards its goal of reaching net-zero by 2050 after receiving the first of five LNG-powered carriers to transport iron ore from Australia’s Port Hedland to Asia.

The 299-metre long Mt. Tourmaline Newcastlemax ore carrier was built by Eastern Pacific Shipping in China and stopped off in Singapore to take on LNG fuel. It will next head to Port Hedland in Western Australia to load iron ore that will then be shipped to customers in China.

The world’s largest miner said that introducing LNG-powered ships would eliminate nitrogen oxide and sulphur oxide emissions and reduce carbon dioxide emissions by about 30% per trip.

BHP has inked several agreements in the past year with some of the world’s largest steel mills to co-operate on low carbon technologies, including Japan’s JFE Steel, South Korea’s Posco, as well as Baowu and HBIS in China.

“This is not small. Together these four steel mills account for 12 per cent of global steelmaking. Whatever the future landscape will be in steelmaking, we will be part of that,” BHP chief commercial officer Vandita Pant said.

While the vessel can also still burn traditional very low sulphur fuel oil, BHP intends to use LNG to power Mt. Tourmaline as much as possible, said Pant.

Scope 3 emissions — those generated indirectly when consumers burn or process commodities produced by BHP — are undoubtedly the hardest to tackle, but they account for as much as 97% of BHP’s total, according to Market Forces executive director Julien Vincent.  They are also larger than Australia’s total emissions in 2019 of 532.5 million tonnes of carbon dioxide equivalent, so stakeholders were expecting more.

“The targets fall short of the ~42% reduction that would be required to align with a 1.5°C pathway from 2020 to 2030,” investors group Market Forces said. “Put simply, BHP has deliberately chosen not to meet the Paris Agreement’s ultimate aim of holding warming to 1.5°C.”

BHP is the top exporter of coking coal used in steelmaking and number three in iron ore, the raw material for steel.

The highly polluting process of making steel involves adding coking coal to iron ore to make the alloy and is responsible for up to 9% of global greenhouse emissions.

It also inked a deal with mining equipment giant Caterpillar (NYSE: CAT) to speed up the development and deployment of zero-emissions mining trucks at BHP sites.

The company has been working on cleaning up its portfolio by exiting thermal coal, divesting metallurgical coal assets, and increasing its exposure to what chief executive officer Mike Henry calls “future-facing commodities”. They include metals such as copper and nickel — key materials for the batteries and wiring that are key to the clean-energy transition.