Cobalt: First Cobalt proposes mergers with Cobalt One and CobalTech

Trent Mell of First Cobalt is making good on his promise to build a diversified portfolio of cobalt assets to capitalize on growing […]
By Robert Seagraves June 26, 2017 At 4:31 pm 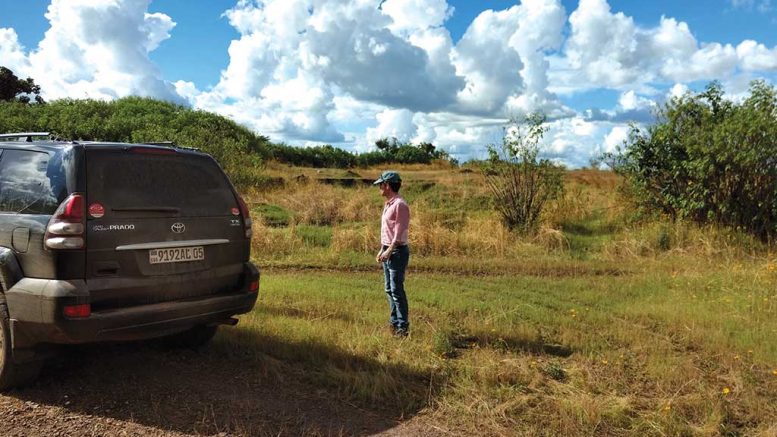 First Cobalt president and CEO Trent Mell scouting properties in the Democratic Republic of the Congo ahead of the recently announced deal with Madini Minerals. Credit: First Cobalt. First Cobalt president and CEO Trent Mell scouting properties in the Democratic Republic of the Congo ahead of the recently announced deal with Madini Minerals. Credit: First Cobalt.[/caption]

Trent Mell of First Cobalt is making good on his promise to build a diversified portfolio of cobalt assets to capitalize on growing demand for the metal in battery production for the electric vehicle market.

The president and CEO has signed letters of intent to merge First Cobalt with Cobalt One and CobalTech Mining, companies that have cobalt properties and processing facilities near First Cobalt’s Keeley-Frontier project in Ontario.

If the mergers are approved and the deals are completed, Mell says, the new company would be the largest cobalt explorer in the world.

“Once you put these three companies together we would have about 45% of the prospective properties in the Cobalt, Ontario, camp,” he says. “Agnico Eagle is left with about 21%, so you can imagine who we want to speak to next.”

Cobalt One owns the Yukon cobalt extraction refinery in Cobalt, Ontario, about 25 km from First Cobalt’s Keeley-Frontier project. The Yukon refinery is one of only four facilities in Canada environmentally permitted to treat and process ore containing arsenic, and the only one in North America with no set limits on processing or storing arsenic from feeds.

The permitting is critical because the Cobalt-area camp has produced silver-cobalt arsenide ores throughout its history, and mineralization at First Cobalt’s flagship asset, the past-producing Keeley-Frontier mine, occurs as silver-cobalt-nickel-bismuth-arsenides.

The refinery sits on 40.2 acres and includes a tailings management facility and two water-management points with both the space and environmental permits needed to expand the tailings facility to twice or three times its current size.

First Cobalt and Cobalt One already have a joint-venture agreement in place on the refinery and surrounding properties, in a transaction signed on June 1, but a full merger of the two companies makes a lot of sense, Mell argues.

“The refinery was built in the 1990s and it is small and may serve a purpose for the short-term just for metallurgical testing or small batches of high-grade material to generate some cash flow,” he explains in an interview. “But longer term, what interests me is really the permitted land where the refinery is located. Our vision for the camp is to go out and find two, three, four open pits. The point is that the permitted property would shorten a permitting timeline. You’ve done away with lots of consultation, and you have ample baseline data, as well as an existing tailings management system … The regulatory hurdles of getting a process plant permitted are significant, so with 40 acres there already permitted, it really helps the economics of a future mine.”

Mell says First Cobalt’s joint-venture option agreement with Cobalt One brought the management teams of both companies together for the first time, and that he has developed a rapport with Cobalt One’s CEO, Jason Bontempo.

“When I was in Vancouver recently I had lunch with Jason, and he shares our view to step away from just looking at high-grade silver veins in old mines and look at what’s left behind in the host rock,” Mell explains. “So after our joint-venture refinery deal, First Cobalt thought we should look to consolidate with Cobalt One.”

There are about 50 cobalt juniors around the world with a market cap of $30 million or less, and investors are looking for scale, Mell contends. “We decided we wanted to become the go-to in the space, and I talked with Jason today just before I sent the merger proposal, and he appeared receptive to the idea and he said his board will go away and consider it.”

Cobalt One’s market cap is twice that of First Cobalt’s, Mell adds, which would give it scale in the market. A secondary listing in Australia would also give the Toronto-based company access to new investors.

“Aussie investors are a little ahead of the curve when it comes to cobalt, as they were with lithium, so valuations tend to be stronger and investor support seems to migrate from retail to institutional investors a little faster, so merging with Cobalt One would help us drive our liquidity and give us access to more capital.”

A merger with CobalTech Mining, meanwhile, would also bring greater scale to First Cobalt. CobalTech has a portfolio of prospective properties with 11 past-producing mines in the town of Cobalt.

Its flagship asset, the Duncan Kerr project, contains the past-producing Kerr Lake and Lawson mines, which operated between 1905 and 1966, and reportedly produced significant cobalt by-product from mining 32.7 million ounces of silver. At Duncan Kerr, CobalTech has 6,588 tonnes of crushed stockpile with an average grade of 761 grams silver per tonne and 0.95% cobalt. The other historic mines on the property are Drummond, Conisil, Hargrave, Belmont, Silver Cross, Campbell-Crowford, Silver Bird and Airgiod.

“We understand that the mill equipment was acquired from China within the past four years by a local entrepreneur, and a circuit was built in a former mill building in the town of Cobalt,” Mell says. “It produced concentrate from stockpiled material found near legacy operations in the camp. There are stockpiles of cobalt/silver material all over the place, so this gentleman was collecting material and producing a concentrate and shipping it directly to China for refining, allegedly with some success.”

If the mergers go ahead, it will take some time to close the transactions, Mell concedes, and then there will be lots of work to be done to better understand the camp’s geology. Previous operators focused on mining the silver veins and very little was understood about the cobalt.

At the Keeley-Frontier property, which it is optioning from Canadian Silver Hunter (TSXV: CSH), First Cobalt plans to start a 7,000-metre drill program on August 1.

“The most exciting thing is going to be the first assay results we get,” Mell says, noting that no work has been done on the property for more than 50 years.

The past-producing Keeley and Frontier mines in the town of Silver Centre, about 25 km south of the town of Cobalt, were originally developed and operated as separate mines before being integrated in 1961.

The neighbouring towns of Silver Centre and Cobalt were the most prolific cobalt jurisdictions in Canada, he says.

In addition to First Cobalt’s Ontario projects, the company is earning a controlling 70% interest in seven properties in the Democratic Republic of Congo, a country that contains about 48% of the world’s cobalt reserves.

Says Mell: “Assuming we get to the finish line with these two deals, we become a cobalt powerhouse in Ontario and beyond.”