ONTARIO – First Cobalt has announced that the feasibility study on an expansion of its Ontario refinery will be complete in the […]
By Magda Gardner March 18, 2020 At 2:40 pm 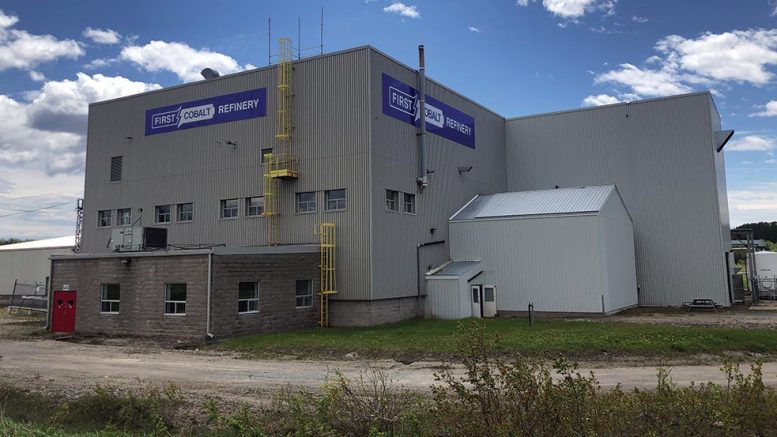 First Cobalt’s cobalt refinery in northern Ontario. Credit: First Cobalt.[/caption] ONTARIO – First Cobalt has announced that the feasibility study on an expansion of its Ontario refinery will be complete in the coming weeks. It is also in discussions with potential automotive off-take partners looking for a North American source of refined cobalt sulphate. The company is also completing a prefeasibility study on a restart of the refinery. “We are in the final stages of a feasibility study designed to validate previous work demonstrating that the First Cobalt refinery can become the only North American refiner of cobalt for the battery market,” Trent Mell, the company’s president and CEO, said in a release. “First Cobalt has a strong balance sheet and sufficient capital for at least the next 12 months. We will also have funds remaining from Glencore loan proceeds to continue with advanced engineering and permitting activities after completion of the feasibility studies.” Once the studies are complete, the company plans to continue with test work and engineering as well as engage with governments to ensure permits are in place. The capital funding for the refinery is expected to come from sources outside the public equity markets. First Cobalt has implemented modified work arrangements due to the economic threats of Covid-19, but, like its Canadian-focused pre-production peers in the gold space, the company does not anticipate major changes to its strategic plan or project timelines at this time. In September, First Cobalt started two engineering studies: a prefeasibility on restarting the refinery at its current 12 t/d capacity as well as a feasibility study on a capacity expansion to 55 t/d. An additional study is planned to examine a restart scenario at the current throughput, followed by an expansion. Last year, a scoping study suggested that the First Cobalt refinery could produce over 25,000 tonnes per year of battery-grade cobalt sulphate, containing approximately 5,000 tonnes of cobalt. First Cobalt continues to plan for a restart of the refinery, together with Glencore, in the fourth quarter of this year with an expansion in the second half of 2021. The First Cobalt refinery in Ontario is the only permitted cobalt refinery in North America. For more information, visit www.FirstCobalt.com.