Blaming the COVID-19 pandemic, Dominion Diamond sought and was granted creditor protection last month. Mining was suspended in March due to requirements […]
By Alisha Hiyate May 13, 2020 At 3:25 pm 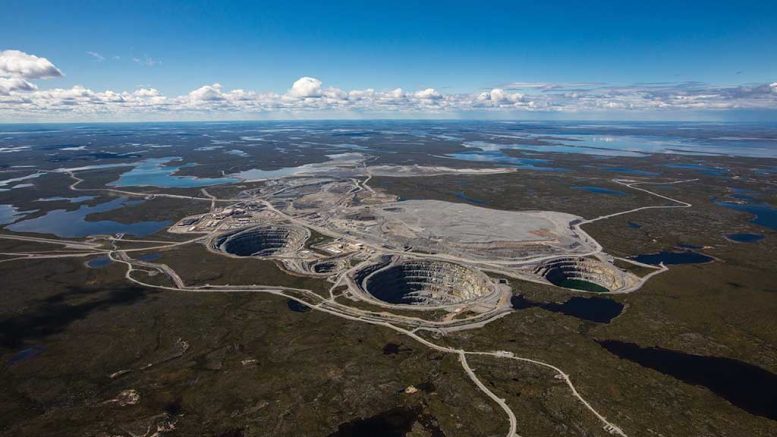 The Ekati mine, in the Northwest Territories. Credit: Washington Companies The Ekati mine, in the Northwest Territories. Credit: Washington Companies[/caption] Blaming the COVID-19 pandemic, Dominion Diamond sought and was granted creditor protection last month. Mining was suspended in March due to requirements to limit the spread of the virus. Dominion is the 100% owner and operator of Canada’s first diamond mine – Ekati – near Lac des Gras, Northwest Territories. It also has a 40% non-operating interest in the Diavik mine (with Rio Tinto) and a 55% interest in the nearby Lac de Gras joint venture exploration project (with North Arrow Minerals). Dominion passed into the hands of privately-owned Washington Companies based in Missoula, Montana, in November 2017. Readers will remember the hotly contested takeover battles of 2006 that resulted in the disappearance of two iconic Canadian nickel producers with global reach – Inco and Falconbridge. Inco was swallowed up by Brazilian Vale SA, and Falconbridge was submersed in what is now Glencore plc. Most everyone in the Canadian mining industry met the change with outrage and then resignation. Things have not been the same in Sudbury, Thompson, or New Caledonia since – starting with the removal of profits that used to flow into Canada. Washington attempted at the time of the purchase to soothe fears regarding another Canadian enterprise falling into foreign hands saying Dominion would remain a stand-alone company with a Canadian headquarters. The buyer further promised to proceed with development project at the mine, maintain environmental stewardship, honour agreements with Indigenous peoples, fund scholarships, and promote Dominion’s CanadaMark brand. How well these promises have been kept is open for discussion as a private company is under no obligation to issue public reports on its management or finances. Dominion’s financial woes stem not only from reaction to the pandemic but also to a lengthy downturn in the global diamond market. Last year consumer demand slowed in China, India banned the import of rough stones, and the world’s largest producers of diamonds, De Beers and Alrosa, respectively, recorded price drops of 20% and 17%. Producers large and small are feeling the pinch. With creditor protection for Dominion, its partners and stakeholders are beginning the recriminations. The union involved at Ekati wants the court to guarantee that the company will honour its pension obligations despite fund shortfall said to be in the millions. Officials at the Diavik mine complain they were blindsided by the creditor protection request. Various businesses in the Northwest Territories claim Dominion owes them as much as $13.2 million and they may never be repaid. So there the tale sits. Dominion says it intends to reopen Ekati when the market improves. But if the company doesn't survive, it will be a sad ending to one of Canada’s brightest stories of the 1980s. -- Marilyn Scales retired as CMJ News Editor in November 2019. She is the proud owner of a 0.3-carat Ekati diamond awarded to her on the occasion of her 30th anniversary with CMJ.