It is difficult to say when the ‘free’ gold market came into existence, since there always has been one. Yes, the gold […]
By Robert Seagraves March 27, 2018 At 4:44 pm 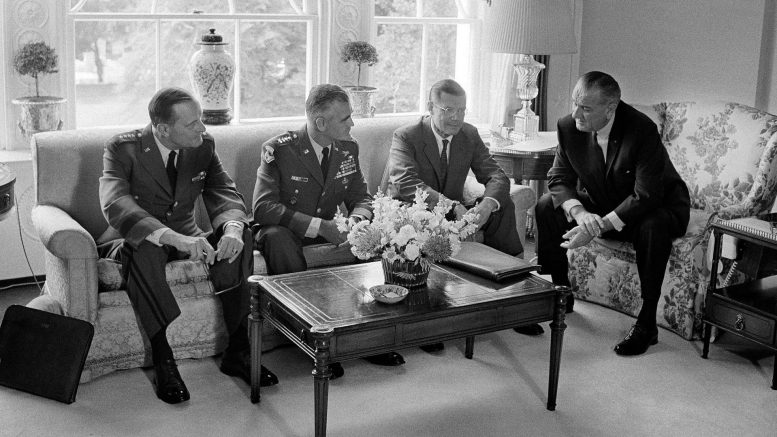 It is difficult to say when the ‘free’ gold market came into existence, since there always has been one. Yes, the gold price has been set and fixed by governments for long periods of time throughout history, as part of various types of gold standards. However, gold prices always have fluctuated around those official prices. [caption id="attachment_1003722562" align="alignnone" width="454"] At the White House in Washington, D.C., in July 1967, from left: General Earle Wheeler, General William Westmoreland, Defense Secretary Robert McNamara and President Lyndon Johnson. Credit: Lyndon B. Johnson Presidential Library.[/caption] Setting such nuances aside, the modern gold market was born 50 years ago this March when the free or private gold price spun out of the control of central banks and governments. A more accurate description is that the fixed dollar-gold exchange rate that existed in the period from World War Two became too expensive and economically destructive for governments to maintain, so they let it go. The process of letting go started in March and April 1968. The change came in two big moves in March and April 1968: The closing of the London Gold Pool and the closing of the U.S. Treasury’s private gold window, through which non-governmental people and entities traded dollars for gold held by the Treasury. Central banks closed the London Gold Pool and stated they no longer would trade gold and currencies in the open market in an attempt to keep the market price of gold in line with the official US$35 per ounce price at which central banks traded gold among themselves. Efforts to keep the two prices aligned had cost central banks hundreds of millions of ounces of gold and billions of dollars from the late 1940s through 1968. In March and April 1968 they gave up trying. A bit of historical background helps explain all of this. As just stated, a free gold market always existed parallel to any official gold standards and gold policies. At times the free gold market was illegal, but at other times it just was there. As World War Two was winding down the global community created the International Monetary Fund at Bretton Woods in 1944 and established what would be a post-war international currency system centered on a U.S. dollar that was convertible to gold at US$35 per ounce. Other currencies were convertible into U.S. dollars at fixed exchange rates. As the post-war era proceeded and economies grew at different paces, the fixed exchange rate system caused monetary crisis after monetary crisis. During this time a few countries allowed private ownership of gold. As the 1960s progressed, most European countries opened up free private gold markets. The U.S. followed suit on Dec. 31, 1974. Under the Bretton Woods system there were two ways in which the U.S. dollar was exchangeable into gold. One was the official public gold window through which national treasuries, central banks, monetary authorities, and ministries of finance could exchange their dollars for gold at US$35 per ounce. The other was the private gold window, which allowed non-government holders of gold to exchange dollars for gold. There was a massive drain on U.S. gold reserves under the Bretton Woods dollar-gold standard. U.S. Treasury gold holdings totaled 652.0 million ounces in 1950. By 1960 they were down to 508.7 million ounces. By the end of 1967 they were down to 344.7 million ounces. The first quarter of 1968 saw a massive monetary and financial crisis, not accidentally coincidental to the Tet Offensive in Vietnam and major political problems in the United States. Governments and private entities turned in US$1.17 billion dollars in exchange for 33.5 million ounces from January into April 1968. This led to a series of changes in the official gold market. On Sunday, March 17, 1968, an announcement was made that on the following day, the London Gold Pool would be closed. The U.S. Congress on March 18 reduced the gold cover of U.S. dollars in circulation to 25%. U.S. President Lyndon Johnson announced that week that the private gold window was closing, that private entities no longer could directly turn in their U.S. dollars in exchange for Treasury gold. The date of the decree is lost to history, a scouring of the internet indicates, but the decree was made in the second half of March, and was effective in April 1968.