Eldorado Gold (TSX: ELD; NYSE: EGO) has released an initial resource estimate for the Ormaque deposit within its Lamaque operation in Quebec. […]
By Canadian Mining Journal Staff February 23, 2021 At 1:59 pm 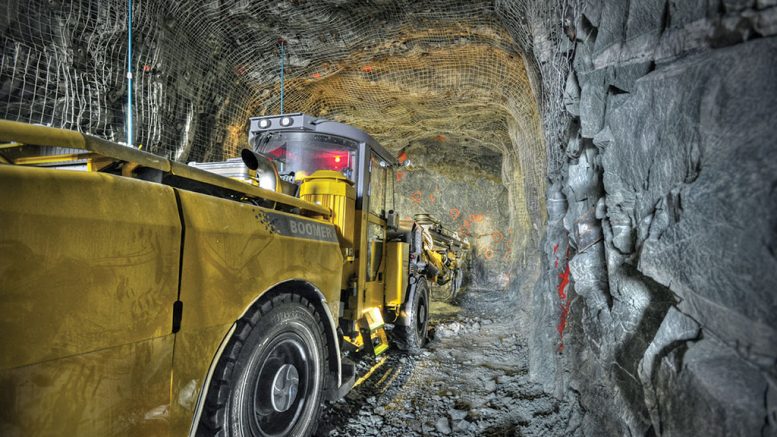 Eldorado Gold (TSX: ELD; NYSE: EGO) has released an initial resource estimate for the Ormaque deposit within its Lamaque operation in Quebec. The deposit, halfway between the operating Lamaque-Triangle mine and the Sigma processing facility, includes 2.6 million inferred tonnes at 9.53 g/t gold, and contains 803,000 gold oz. Ormaque is also next to an ore haulage decline that is under construction and will connect the mine with the mill. Based on current development rates, this excavation will reach Ormaque in the third quarter of this year.

“This early exploration success at Ormaque highlights the outstanding growth potential at Lamaque,” George Burns, Eldorado’s president and CEO, said in a release. “The short time frame from initial discovery to maiden inferred resource is a testament to the drive of our team and the strong exploration potential within our land package in the Abitibi greenstone belt.”

Burns added that the strike continuity, vein orientations and dimensions of the Ormaque deposit are similar to parts of the historic Sigma and Mine #2 operations. Sigma previously generated 4.5 million gold oz., Mine #2 produced over 237,000 oz. between 1950 and 1955.

The majority of the mineralized lenses at Ormaque are open – drilling in the first half of this year will include infilling upper lenses of the resource, step-out holes targeting extensions of these lenses and wider step-outs testing for longer extensions and new lenses.

The release also notes that Eldorado’s strategy for the Val d’Or region is intended to add organic opportunities around the Lamaque-Triangle mine. The Sigma mill, with a permitted capacity of 5,000 t/d, is currently operating at 2,200 t/d.

Eldorado added the Lamaque complex to its portfolio through a $590-million 2017 acquisition of Integra Gold. Earlier this year, the gold producer also announced a US$105-million purchase of Quebec-focused junior QMX Gold, whose Bonnefond gold project is approximately 20 km from the Sigma mill.

In a note to investors, Kerry Smith of Haywood Capital Markets wrote that the initial resource at Ormaque is “better than expected.” With the resource update, Smith reiterates his ‘buy’ rating and $24 target for the shares.

According to Brian Quast of BMO Capital Markets, “The positive exploration results at Ormaque validate Eldorado's commitment to Quebec as shown through the company's recent acquisition of QMX Gold” and also “validate Eldorado's recently announced acquisition of QMX.” Quast considers the latest news a “mild positive” and maintains an ‘outperform’ rating and a $23 target for Eldorado.