According to the Canadian miner, the grand total for 2020 adds up to 242,400 oz. of gold, accounting for what was produced from the moment Fruta del Norte reached commercial production on March 1, 2020.

“The grades mined, recoveries and average throughput were all better than expected during the fourth quarter. This enabled us to exceed the upper end of our gold production guidance of 170,000 ounces for the second half of 2020,” Ron Hochstein, Lundin’s president and CEO, said in a media statement.

“I am very proud of the operational results the team achieved during a challenging time, which included a 15-day blockade of the road to Fruta del Norte.”

Hochstein emphasized that the company is now focused on continuing to optimize its operations and moving forward with the US$18.6-million expansion project, which will take throughput from 3,500 to 4,200 tonnes per day over the life of mine and would be funded by cash flow from operations.

Located in southeastern Zamora Chinchipe province, the 700-sq.-km Fruta del Norte operation is considered one the largest and highest-grade gold projects in the world currently in production. 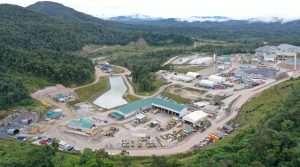