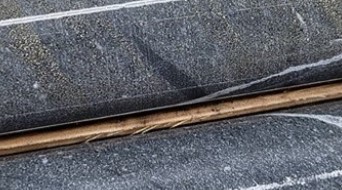 Galleon Gold (TSXV: GGO) has discovered a new mineralized area with multiple gold zones at its 100% West Cache property near Timmins, Ont. The new find is in a previously undrilled area from 50 to 250 metres south of zone 9.

The mineralization is open along strike and down dip.

This new area to the south has some similarities and some differences to the mineralization discovered elsewhere on the property. The southern area has similar bedded overall geometry that conform to sediment-dominant greywacke and argillite host rocks. There are also similar areas of undifferentiated volcanic-intrusive units with mineralized margins and multiple style of pyrite mineralization correlating to gold grade. The south differs in its increased shear texture, late shearing and brittle faulting that created local gouge and fracture zones, and more pyrrhotite and possibly galena in the sulphide zones.

The West Cache (formerly Timmins Porcupine West) property has been explored since 1927. It appears related to the prolific Hollinger-McIntyre-Coniarum system. The 2013 43-101 report put both open pit and underground resources at 8.7 million indicated tonnes at 2.17 g/t gold and 6.3 million inferred tonnes grading 2.31 g/t gold. The categories contain 609,000 oz. and 470,000 oz. of gold, respectively.

More information is available at www.GalleonGold.com.