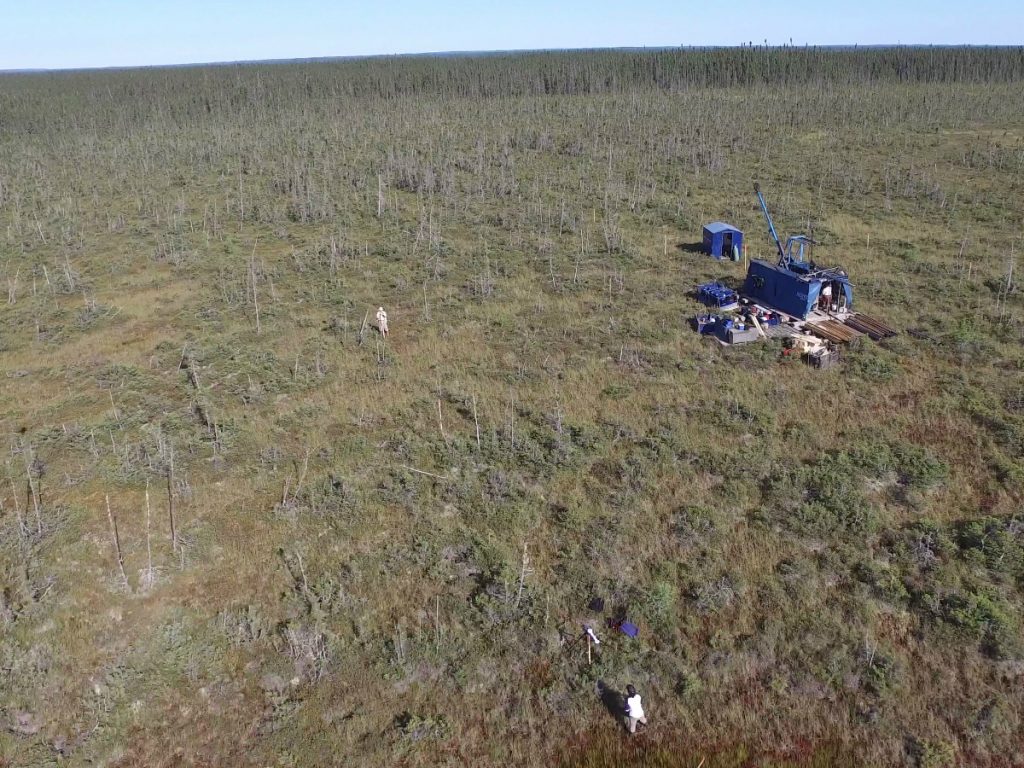 Balmoral Resources has outlined a first resource for its Martiniere gold project in Quebec of 431,000 oz. of gold. The open pit, indicated resource is contained in 6.8 million tonnes grading 1.96 g/t gold, using a cutoff grade of 0.5 g/t gold. The estimate encompasses both the Bug and Martiniere West deposits. [caption id="attachment_1003722550" align="alignnone" width="424"] Drilling at Bug South at Balmoral Resources' Martiniere project. Credit: Balmoral Resources[/caption] Underground resources add another 159,000 oz. gold contained in 1.1 million tonnes grading 4.54 g/t gold, and Inferred open pit constrained resources add 11,000 oz. in 132,000 tonnes grading 2.5 grams gold. The initial resource estimate, calculated at a base case gold price of US$1,300 per oz., confirms the continuity of the gold mineralization within the Bug and Martiniere West deposits and indicates potential for a significant portion of the currently outlined deposits (73%) to be extracted via open pit. Over 93% of the estimated initial resource is contained within the upper 350 metres of the system. Expansion drilling below this level has begun and is currently anticipated to continue through the balance of 2018. Balmoral’s drilling has confirmed that the Bug Gold deposit continues to over 650 metres vertical depth, and is open below that, providing a clear path for near-term resource expansion. The estimate does not include the recently discovered Bug NW Extension or several other promising recent gold discoveries on the property. “The initial resource estimate for the Martiniere gold system, which outlines those resources occurring principally over the upper 350 vertical metres of the system, provides a strong base from which to continue to expand” said Darin Wagner, president and CEO of Balmoral. “The 2016 discovery of the Bug South deposit, and the multiple near surface discoveries since then, have provided the opportunity to outline a significant open pit resource at Martiniere, which could then potentially give way to underground development several years into any envisaged future operation. Our near-term focus at Martiniere will remain on the expansion of the gold system on multiple fronts.” Read more about the new resource at www.balmoralresources.com.